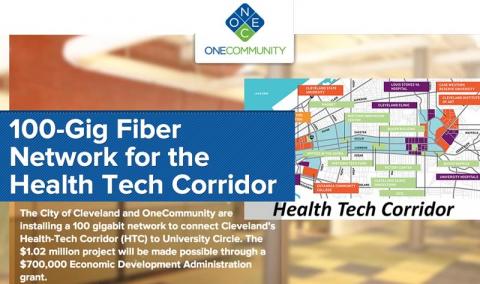 I was not able to attend the City of Cleveland and OneCommunity's November 21, 2014, announcement. I watched it via Twitter, and thought it was very important to write this blog post to say:

...for making Cleveland the first city in the United States to have a commercially available 100-gigabit fiber network!

EDA $700K GRANT TO CITY OF CLEVELAND/ONECOMMUNITY LAYS GROUNDWORK FOR FIRST COMMERCIALLY AVAILABLE 100 GIGABIT FIBER NETWORK
Cleveland, OH, November 21, 2014-The City of Cleveland and OneCommunity are installing the nation’s first commercially available metropolitan 100 gigabit network. The 100 gigabit network will connect in downtown Cleveland, through Cleveland’s Health-Tech Corridor (HTC) to University Circle. The innovative $1.02 million project will be made possible through a recently-awarded, $700,000 Economic Development Administration Grant combined with supplemental funding from the City of Cleveland and OneCommunity setting a new “Gold Standard” for connectivity.

You can read OneCommunity's full press release on their website or here in the PDF they provided. 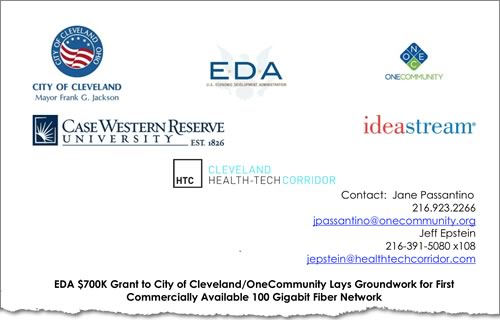 I recently saw the Western Reserve Historical Society (@WRHS_History) exhibit entitled Entrepreneurship in the Western Reserve (read their PDF press release for more details), which presented "...individuals and businesses that took risks in creating new businesses and industries in Northeast Ohio." Seeing the exhibit made me think about how we are living in exciting times in Greater Cleveland right now in both creative use of technology and entrepreneurship initiatives.

For example, the Cleveland Museum of Art's Gallery One (@ClevelandArt - See hashtag: #GalleryOne) is the first installation of its kind in the world. Learn more in these blog posts: 12/27/12 @ClevelandArt #GalleryOne Crash Party; 1/18/13 CMA's New Interactive Gallery Opens, plus GCPCUG & CLE Drupal; and 1/30/13 Photos of Gallery One Opening!

Now, with this government nonprofit partnership, the City of Cleveland (@CityOfCleveland) and OneCommunity (@OneCommunity) are making history today. I am excited to know that this is just the beginning for Cleveland! 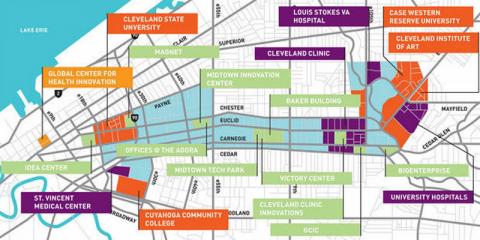 OneCommunity received a lot of press due to the importance of the City of Cleveland being the first in the nation to be developing a commercially available 100-gigabit fiber network. Here are some of the articles I read and shared via Twitter, plus a link to some addtional articles that OneCommunity collected on its website. Rather than repeat what they presented, I suggest you read these to learn more:

There are even more articles about OneComunity's announcement. Please see OneCommunitiy's 100-GIG FIBER NETWORK MEDIA COVERAGE for a more complete list of articles.

Here are my @sos_jr tweets and retweets about the #100gigCLE event. Please share any articles and photos/videos from the event by retweeting those that you find interesting.

Wait until you hear the BIG news on Friday. Stay tuned!

95% of things that can be connected to the internet are not yet. @levgonick @CleveHealthTech #100gigCLE

Want to experience the fastest fiber in the USA? #100gigabit #Cleveland, come to http://t.co/rg8Eq9mLQE @clevehealthtech @OneCommunity

I really hope that the #100gigCLE anncmnt is not fiber-to-the-news, and is a real opportunity to connect CLE biz&residents! @OneCommunity

We now have an infrastructure to help move big data around. U don't have this in Silicon Valley @explorys #100gigCLE

#100gigcle happen w/ @CityofCleveland partners! RT @OneCommunity: This is a zing zag aerial deployment which will work with @clepublicpower

Lev mention @ByteGrid as major partner whose time will come

Proud to present #100gigCle, the fastest commercially available fiber connection in the US, visit http://t.co/rg8Eq9mLQE @clevehealthtech

Everyone agrees the 100 gigabit news is a positive thumbs up. #100gigCLE pic.twitter.com/sMT10lN0Ui

#CLE: home of the fastest Internet connection in the U.S. #100gigCLE powered by @OneCommunity @EverstreamNET http://t.co/V8HAWobkdL

FACT: @CityofCleveland's 100 gigabit fiber optic network has the potential to create 115 #jobs and to generate $35M in private #investement.

Work on the new 100-gigabit fiber network is scheduled to start in January 2015, and will be up and running in six to eight months! Yes, the future is happening as soon as summer 2015!

Learn more and follow the successes of this project on the 100GigCleveland.org website that the Cleveland Health-Tech Corridor (@CleveHealthTech) and OneCommunity (@OneCommunity) have set up.

The Future! The Big Gig Challenge! 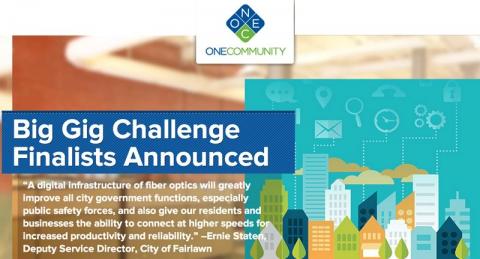 In addition to what is being announced on the 100GigCleveland.org website, there is even more happening that will affect the future of the Greater Cleveland area. Be sure to watch for announcements regarding the OneCommunity Big Gig Challenge.

OneCommunity pledged to make funds available in the form of a grant for municipally-led, community-wide fiber construction projects. It was seeking proposals that establish creative and collaborative expansion opportunities that connect community anchor institutions, government facilities and business districts in an effort to attract and retain the innovative and entrepreneurial businesses of the twenty-first century. Funding will be provided through a public-private partnership approach with grant funding accounting for up to 25 percent of the total project costs for the awarded grantees.

The following are finalists in the OneCommunity Big Gig Challenge grant incentive program, which is designed to inspire creative ways for using OneCommunity extensive fiber networks:

The selected recipient will receive a grant award of services and/or equipment worth up to 25% of total project costs (up to a total of $2,000,000) for building ultra-high-speed broadband networks.

I'm excited to not only learn who is the recipient, but to watch in the coming years how a new fiber network can be used as an economic development tool.

Even More From OneCommunity...

There is so much more going on with OneCommunity. Please read my September 25, 2014, OneCommunity 2014 Annual Meeting blog post to learn more. Also, please be sure to visit the OneCommunity.org website and follow @OneCommunity on Twitter to keep up with everything that is happening. We are VERY fortunate to have a nonprofit like OneCommunity working to improve our community.

Congratulations to the following recipients of the OneCommunity BIG GIG Challenge Grant! I look forward to reading about the economic development activity generated in your communities as a result of this investment.

Please read all the details in the ​January 20, 2015, OneCommunity press release: ONECOMMUNITY ANNOUNCES RECIPIENTS OF ITS BIG GIG CHALLENGE GRANT

Here are my @sos_jr tweets/retweets about the announcement:

The fourth recipient of the Big Gig Challenge Grant is the Village of Glenwillow. Congrats to all! http://t.co/cIO4dkPhZ6 #DreamBigNow