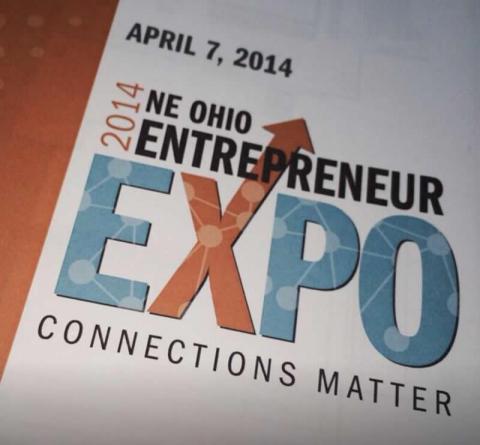 My goal is to share a little of what I experienced and learned at the 2014 Northeast Ohio Entrepreneur Expo (NEOexpo.org), and to invite you to learn more by following the links I have provided. In this post, I would like to share some comments I heard during the day, as well as photos, tweets, and links to what others wrote about the event.

When I first arrived, I was amazed by the size of the event and how the Cleveland Museum of Art (@ClevelandArt) made a great venue. (I subsequently heard that it was the largest entrepreneur expo in its history.) The large and varied group of people added to the excitement. My only regret is that I did not get around to all the many booths.

Here are a few points taken from notes I wrote on my iPad during the day:

I recommend reading what others wrote, and listening to the "Attracting Capital Between The Coasts" podcast that Jumpstart has provided on their website. I included links below to those articles I am aware of, and invite you to add a comment below if you know of other resources.

You can also take a look at what was tweeted with the #NEOExpo14 tag.

Here are my tweets and retweets about the 2014 Northeast Ohio Entrepreneur Expo. Please be sure to read through these. I feel they are important in how they reflect some of the activity of the day.

More than 800 people have registered for #NEOExpo14 on 4/7! Don't miss out on this fast-paced event: http://t.co/ioFVjxoYVp

Who is going to @JumpStartInc's #NEOExpo14? Visit us there! We'll have a table and our very own Rick Earles is serving as a mentor!

If not get enough today at #NEOExpo14 hear from @BGV_Cleveland about expo they will be at 5/8. pic.twitter.com/vQTK8JQu4x

Tag your #NEOExpo14 investor panel tweets with #expovc to follow along with the conversation.

Hear at #NEOExpo14 that there is a shortage of senior sales staff. There are careers to be made in #Cleveland area. pic.twitter.com/Xd2PD0bOd4

Idea at #NEOExpo14 repeated by @johncampanelli of @CrainsCleveland: Say "no" to one million $$ projects. Need to go for larger amounts.

We need companies to stay here and grow here #NEOExpo14

Feeling that innovated vibe at the #NEOExpo14

Will good companies find capital. Mark Kvamme: "Yes," but it depends on what "good" means. And if they need it. #NEOExpo14

#NEOExpo14 Look for entrepreneur that makes product that they use. A product that meets a real need. A good company sells to ppl w/ $ to buy

"Talent's driving every issue and every dimension" in U.S., says Leach #vcexpo #NEOExpo14

At #NEOExpo14 talking about Brain Drain. Now as economy is getting better, we need to do more to help young companies or risk losing talent

In 10 years, what will the discussion hopefully be about? The talent gap. @JayKatPgh #expovc #NEOExpo14

@JumpStartInc #NEOExpo14 Panel predicts in 10 years NEO will be a technology powerhouse--the seeds have been planted!

.@AJ_Stedillie it was good to talk you. Thx for making a point to come up to me at #NEOExpo14 to update me on your work w/ @CompassMD.

At #NEOExpo14 meet art student who tells me about @CWRUthinkbox future growth & art work he does there.

Learning about online order guitar & it is milled for you!! #NEOExpo14 pic.twitter.com/WmxwP6bI2h

Today's #NEOExpo14 wouldn't have been possible w.o our sponsors. Thank you to @medmutual, @CharterOne Foundation (cont'd) (1/2)

We won 2nd place today at the #NEOExpo14 Student competition! Thanks @JumpStartInc , @hiramcollege & all that voted and supported!

@AJ_Stedillie @sadukie @CompassMD So great to see so many of our wonderful clients in one place. Always leaves me energized!

Had an awesome time at #NEOExpo14 today! Met some awesome people and love seeing this much innovation in the region

@sos_jr @sos_jr Thx! Was great meeting you, Stuart! If you're ever in the market for your own truly custom guitar, http://t.co/ZpvJQYLsNe!

We had a great time at the #NEOexpo14 yesterday. If you missed the event, here's a quick rundown via @rlsmithpd: http://t.co/VcTBSBuJk0

ICYMI: Do you see yourself (or someone you know?) in our #NEOExpo14 slideshow? Take a look: http://t.co/pLuqpveu34

If U missed #NEOExpo14 check out booklet from the event provided by @JumpStartInc http://t.co/nXgyXkRYi4 It lIsts #Cleveland #entrepreneur

JumpStart is the organizer of the 2014 Northeast Ohio Entrepreneur Expo. Be sure to view the official expo website at NEOexpo.org, view the #NEOExpo14 Twitter hashtag, and follow JumpStart, Inc. (JumpStartInc.org) on Twitter at: @JumpStartInc. Here are some materials that JumpStart provided -- thank you JumpStart!!

As I mentioned above, listen to Podcast: Attracting Capital Between The Coasts posted by the JumpStart Team on Thursday, April 10, 2014, to hear the main panel discussion.

Looking at the photos in the article The Charter One Foundation Student Business Idea Competition posted by the JumpStart Team on Wednesday, April 9, 2014, I was very interested to see the photo of Dr. Brian Grimberg from Case Western Reserve University (@CWRU). I had met Dr. Grimberg at the January 23, 2014, TechPint Cleveland III event (read my blog post with more information on Dr. Grimberg's work on treating malaria around the world). The CWRU Disease Diagnostic Group was one of the winners of the competition. I saw Dr. Grimberg at the expo, but unfortunately did not get a change to talk to him. Be sure to read the article to learn about all the winners of the Charter One Foundation Student Business Idea Competition.

Here is an abridged version of the e-newsletter entitled "In Case You Missed It | Connect for the Community" that JumpStart sent out after the event. It gives some nice details about the success of the day: 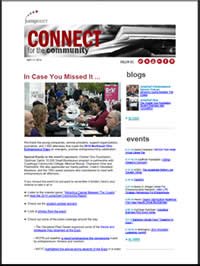 The most important item here to view is the 2014 NE Ohio Entrepreneur Expo Connections Matter program book "brought to you by JumpStart." More than just the agenda, it contains the list of sponsors, "Attracting Capital Between The Coasts" panel members' biographies, the list of speed advisors, and information on the entrepreneur showcase exhibitors.

A big thank-you to JumpStart for allowing me to share their official 2014 Northeast Ohio Entrepreneur Expo photos from the event:

Here is some of what others have shared about the 2014 Northeast Ohio Entrepreneur Expo:

If you know of others, please add to the comments below.