Originally, I was not going to be able to attend the January 23, 2014, TechPint Cleveland at Mahall's 20 Lanes in Lakewood, Ohio. I knew that TechPint (TechPint.org - @TechPintNews) would sell out, and with my busy schedule this January, I did not want to take a ticket from someone else who would benefit from the event. As I anticipated, TechPint did sell out all 300 tickets very early.

Kismet -- I think I was meant to attend. The night before the event, a friend contacted me via Facebook saying she now had a family commitment that conflicted with TechPint. Again, I said she should first offer the ticket to someone else. (I attended the first TechPint, and wanted to give others the first chance at the experience.) At first, she had someone who thought they could use the ticket, but then they had to back out just before noon the day of TechPint. Like I said -- Kismet -- so by early afternoon I had my ticket.

When I arrived, things were hopping! I briefly talked with a few of the representatives in the demo area (next time I must come earlier so I have time to see everything) before going to the main stage area for the Flashstarts Global Pitcher Night.

With some theater lighting, the side room of this bowling alley was transformed into an energetic startup pitch area. The $5,000 in cash prizes was distributed at the discretion of the judges of the startup pitches. For more details, read "Tonight’s TechPint Event Could Net One Clever Entrepreneur $5k" from the Fresh Water e-magazine (@FreshWaterCLE) article on the @FlashStarts website.

I loved how this part of the evening ended with the passing of the basket, but instead of putting money into the basket, everyone was invited to take money to either tip the waitstaff or to invest on Cleveland ventures. 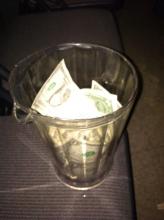 Startup Weekends are 54-hour events designed to provide superior experiential education for technical and non-technical entrepreneurs. Beginning with Friday night pitches and continuing through brainstorming, business plan development, and basic prototype creation, Startup Weekends culminate in Sunday night demos and presentations. Participants create working startups during the event and are able to collaborate with like-minded individuals outside of their daily networks. All teams hear talks by industry leaders and receive valuable feedback from local entrepreneurials. The weekend is centered around action, innovation, and education. Whether you are looking for feedback on a idea, a co-founder, specific skill sets, or a team to help you execute, Startup Weekends are the perfect environment in which to test your idea and take the first steps towards launching your own startup.

Thank you to the Startup Weekend leaders who sent me the following discount code word (if you are on Twitter, please use this link to retweet and share with your followers):

Charles Stack
Co-Founder and CEO of FlashStarts
As a serial entrepreneur, startup advisor and angel investor, he holds several patents and has founded and invested in many successful (and failed) ventures. Charles created the framework of online retailing with his creation of the first online bookstore, Books.com. He pioneered the concept of web services with Flashline. The enterprise software vendor was eventually acquired by Oracle in 2008.

Doug Hardman
CEO and Founder of SparkBase
During the last decade, Doug has lead SparkBase to become one of the premier loyalty platforms in the industry powering loyalty programs and gift cards for 9,000+ businesses in the US and internationally. Doug's mix of vision and "get it done" attitude fuels the team at SparkBase, which has grown from 3 employees to 40 in the last 5 years and continues to double revenue annually.

Be sure to read the tweets below with some of the details from their talk.

Later in the evening was TechPint's first Pitch Improv competition -- Cleveland startup comedy!! You had to be there to hear pitches for...

Participants had the opportunity to get out of their public speaking comfort zone by pitching comical startups in front of a live audience. I hope TechPint continues to do Pitch Improv at future events -- fun!

There were over 300 people registered for this sold-out event, which means there were 300 different stories about experiences from this event. Here are five of the people with whom I connected:

Be sure not to miss the next TechPint -- tickets will most likely sell out!

Here are dates of other events mentioned in this article. Be sure to watch my weekly tweets and blog posts for more events.

Please be sure to read these tweets to get a flavor of the event. Many include photos.

Crazy. Think all 300 #TechPint tickets will be sold out tonight. #thrivingcleveland

#TechPint is sold out! See you all on Thursday.

If you missed it, a nice snapshot here of NEO's startup community http://t.co/XU7VDIlujf #TechPint

Tomorrow we interview 2 successful NEO entrepreneurs at #TechPint, Charles Stack + Doug Hardman. Do you have questions you want us to ask?

We're all super excited for @TechPintNews 3 this Thursday! Be sure to check out the @CompassMD demo!

Congrats @TechPintNews for your sold out event tonight! For those not able to get a ticket, see other #CLE #tech: http://t.co/RSITIxyDiQ

.@TechPintNews I was just emailed a ticket from friend who can't attend. Will I be able to check in w/ her name? Looking forward to tonight!

And the first #TechPint of 2014 is getting started, for those on the road be careful, the weather is getting slick pic.twitter.com/X88Mcp4hnZ

The weather does not seem to have deterred the #TechPint crowd as more people keep arriving - #CLE pic.twitter.com/6rQEAXG77g

At #TechPint, the opposite of church. A basket of $$ going around. Take $2 and spend. pic.twitter.com/MZxAeN1owJ

"Find people smarter than you, hire them, and then trust them" -@DougHardman #techpint #CLE

"Some people get MBAs, I barely got out of high school" -@DougHardman #techpint #CLE

"It's not about being smart enough to pivot, it is about being brave enough" -@DougHardman #techpint #CLE #startup

"Investor communication is paramount, if you take money and go dark, you will not see another dime" -@DougHardman #techpint #CLE

Shout out to the #CLE Venture for America crew that is here tonight at #techpint pic.twitter.com/SAee5EvTU3

"I though myself Dbase the way people played adventure games, typing until something happened"- Charles Stack @FlashStarts #techpint

"In a way, the less you know the better" Charles Stack of @FlashStarts #CLE #startups #techpint

"Talking to lawyers is a terrible idea, all they know is pain, disaster, and failure" -Charles Stack from @Flashstarts #techpint

"To be a successful entrepreneur, you need to be voracious in your consumption of information" -Charles Stack of @FlashStarts #CLE #techpint

.@cstack: Equity Crowdfunding is new, disruptive, & can open up capital for regions that don't have much access to it. #TechPint

"I'm never stressed because we aren't in a business where anyone does, if I was in a foxhole I would have another answer" @cstack #techpint

The next stage of #techpint, the impromptu pitch session w/ our awesome host @guharakesh - #CLE pic.twitter.com/WvL0LdaSAr

Learn about Lakewood #MakerSpace from @teachinghumans at #TechPint. 1st in High School.

Seeing eye children by @teachinghumans is the #TechPint comedy winner.

Things are winding down a bit at #techpint. Thx @Mahalls20Lanes for having us here. pic.twitter.com/rV5y1lZcil

.@workinwithwords got home a few minutes ago. U missed #StartUp comedy, plus meet gr8 ppl at @TechPintNews's #TechPint. Impressed by leaders

Thx @YABOYA to you and the other #TechPint leaders for making it happen in #Cleveland. I met a lot of interesting ppl tonight! #HappyInCLE

It is 12:37AM and a great start to my Friday. Goodnight Twitterverse. I hope U all have great Friday and weekend.

.@daniel_dudley gr8 talking to U last night about #TechPint. I noted at both @TechPintNews & #ClevelandEW events U share useful tweets. #FF

And all that jazz .. come to TechPint Akron on March 6th, for great speakers & smooth music http://t.co/vGBLkM8ixU