OneCommunity's work is interesting and important!

VISION: Advanced digital capabilities and effective use of technology will help transform the region and establish Northeast Ohio as a national hub for innovation and economic growth.

I remember being immediately fascinated by the potential. Here was an organization that would make use of underused, pre-existing fiber-optic cable to provide faster connectivity to benefit Greater Clevelanders!

Fast-forward to last year what I attended OneCommunity's 2013 Annual Meeting, and learned about their partnership with LaunchHouse (@LaunchHouse) in Shaker Heights (@ShakerOnline) to create the first "fiberhood" in northeast Ohio . . .

. . . and now there was even more exciting news at their 2014 Annual Meeting! In this blog post, I will share what I learned at OneCommunity's Annual Meeting.

The September 10, 2014, OneCommunity Annual Meeting started with a presentation by Sightdeck (@SightDeckKC) from Kansas City, Missouri. With the high-speed access provided by OneCommunity, the attendees were able to watch an interactive demonatration connecting Los Angeles, Kansas City, and Cleveland. Thank you to Dan Hanson (@DanHanson) of Great Lakes Geek (@GreatLakesGeek) for allowing me to share this video of the demo:

SightDeck demo at One Community annual meeting
Published by Dan Hanson on Sep 13, 2014
Lev Gonick, CEO of One Community, introduced a demo to show the power of broadband. He spoke at the 2014 annual meeting of One Community in Cleveland. Lev connected to a colleague in Los Angeles who demonstrated their Sight Deck projected image application and then linked in a Children’s Mercy hospital rep in Kansas City who spoke about the benefits of Telemedicine. http://www.greatlakesgeek.com/

Here is my vine video of the remote medicine demo from the annual meeting:

OneCommunity's Chief Executive Officer, Lev Gonick (@LevGonick), touched on these points, to which I have added some information:

OneCommunity Network Map: How We Have Grown, and the Communities We Serve

The Health-Tech Corridor (HTC) spans more than 40 city blocks and 10 distinct neighborhoods in MidTown and is the focus of collaboration with the City of Cleveland, the Cleveland Foundation and others working on turning the brownfields of the HTC into a new neighborhood attracting tech start ups, health care spin offs, and cloud service providers. While the HTC already boasts an impressive concentration of world-class healthcare institutions, major academic institutions, cutting-edge business incubators and thriving healthcare and high-tech companies, there are areas for growth and development that, when done collaboratively, will result in innovation and progress for NEO.

Everstream is a Cleveland, Ohio based network service provider focused on providing fiber based Ethernet and Internet services to business customers across Northeast Ohio. With over 2400 miles of fiber across 24 counties and comprehensive data center connectivity at 10 Gigabit speed, we provide the fastest, most reliable network in the region. Our 24 / 7 network operations center is staffed and operated by certified technical staff based in downtown Cleveland.

Everstream shares infrastructure and support teams with OneCommunity who since 2010 has invested $100 million in Northeast Ohio. This arrangement provides the same customer support, operations, construction and engineering team that has added hundreds of on-net customer locations for 90% of all health care providers, majority of colleges and universities, and wholesale carrier customers. Our senior leadership team has decades of experience designing, building and operating fiber based networks ensuring that Everstream is positioned to provide the service level agreements, flexible solutions and installation timeframes needed for business.

After reading this, you can see why I am so excited that we have OneCommunity in Cleveland. We are the only city in the United States to have a resource like this!

I did not have time to view these videos about the award winner, but figured I would include the links if you are intersted:

Gigi B. Sohn - “The Art of the Possible”

It was great to hear Gigi B. Sohn's (@GigiBSohnFCC) keynote presentation after communicating with her via Twitter (see my FFC blog posts: Comment to @FCC on #NetNeutrality and Take Action! @FCC and #NetNeutrality).

Thanks to Gigi B. Sohn, who provided a full transcript of her presentation on the FCC website. I have also included her “The Art of the Possible” talk in this blog post as a PDF file (click here to read).

I pulled out some quotes of Gigi B. Sohn's “The Art of the Possible” that show the importance of current activities at the Federal Communications Commission (FCC) (@FCC):

... FCC has provided hundreds of millions of dollars to connect rural areas to broadband, and will soon be funding “rural broadband experiments” that seek to bring very high speed, scalable broadband to those areas.

...we also have asked more generally whether we should raise our benchmark definition for “broadband” from the current 4 Mbps download speed to 10 Mbps or higher.

The FCC has for the first time made it possible for 10 million students to have access to Wi-Fi in their classrooms and libraries, and we have made other changes to the 18 year old E-Rate program that will get us closer to the President’s goal of connecting 99% of schools and libraries with 100 Mbps speed in the next 4 years.

We have adopted rules that will allow for smaller competitive wireless companies to get access to more spectrum in our first-of-a-kind incentive auction...
... this auction will allow over-the-air broadcasters to sell their spectrum back to the FCC, which will then auction it to wireless broadband companies. The goals are to have greater competition in wireless broadband access, greater innovation in unlicensed wireless devices and more robust wireless networks.

While it may seem obvious to many of you, for an FCC Chairman to say publicly that meaningful competition for real high-speed broadband Internet access (which he defines as a minimum of 25 Mbps) is lacking and that public policy should help protect, encourage and create competition is a very big deal.

As of early this afternoon, 1,477,301 comments have been submitted in the net neutrality proceeding. For those of you keeping score, that is the highest number of submissions made in a specific FCC matter...

Telephone companies ... are moving to Internet protocol or “IP” networks that use a variety of means of transmission, including fiber and wireless...
...What obligations will attach in an all-IP environment? Will 911 calls be required to go through with the same reliability as old landline networks? Will carriers be responsible to serve far-flung places like rural Alaska, the foothills of the Rockies or the Upper Peninsula of Michigan? Will AT&T be required to complete a call from a Time Warner Cable customer and vice versa? What about protections against privacy violations and fraudulent billing?

But we’ll need your help and the help of others who care as deeply about these networks as we do to turn this possibility into reality. The public apathy and lack of understanding of communications policy issues that marked the first half of my career played right into the hands of the “haves.” We cannot let that happen at a time when access to the broadband Internet has become such an integral part of everyone’s lives. The Art of the Possible starts with you.

Here is an interview with Gigi B. Sohn that OneCommunity provided me from before the annual meeting started.

Annual Meeting: Keynote Speaker Gigi B. Sohn of the FCC

Here are my @sos_jr tweets and retweets about the annual meeting. If you are on Twitter, please retweet those that provide interesting information or photos, so your followers can learn about OneCommunity:

Because of the new way Twitter displays multiple photos,
it is best to click on each one to view it fully.

.@OneCommunity U R welcome! I think what U do important & your mtg gr8 for learning about FCC http://t.co/8iRqecu8Qe pic.twitter.com/FgO0rPDKhp

Looking forward to seeing @levgonick & talking to @OneCommunity about "The Art of the Possible..." See you soon #Cleveland!

RT @OneCommunity: @levgonick at the podium. And the 10th anniversary meeting begins. #Big10Cleveland

We're at @OneCommunity's annual meeting interviewing @GigiBSohnFCC on the important topics as we speak! pic.twitter.com/VoGSRS8OuB

I learning of @OneCommunity ~8 years ago when I was on @GCPCUG bd & their director spoke at our mtg. Now their 10th year! #Big10Cleveland

Next Monday 9/15 is the deadline for the 2nd round of #OpenInternet comments. Submit via openinternet@fcc.gov.

So Cleveland really does rock! pic.twitter.com/oY0LBbS2XF

.@GreatLakesGeek U may B interested in @workinwithwords talk at my 11/15 http://t.co/OWzQgvswsR mtg: Content Management Systems Hath Wrought

#netneutrality comment update: 1,477,301 have been filed. Most submissions to an @FCC docket.

#Big10Cleveland what am amazing demonstration of high tech by @OneCommunity #VictoryCenter

.@CleveHealthTech I read in @OneCommunity Annual Report about support of @CleveFoundation so I lookin at your website http://t.co/6XKk9yPIvv 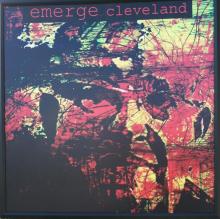 A week later, on September 19, 2014, I returned to Victory Center for Emerge Cleveland's (@EMERGEcle) opening of artist Steven Standley's installation.

I want to thank Lillian Kuri and @EMERGEcle for inviting me to attend. The following tweets and retweets will give you a flavor of the evening:

Amazing opening of 32 works of art by steven standley pic.twitter.com/ByHJpJBJFk

Enjoy my photos from the evening:

With the development of the new Health-Tech Corridor (HTC), other OneCommunity programs, and new FCC initiatives, this is just the beginning of more interesting times. I look forward to the future.