On July 17, 2014, I wrote to Federal Communications Commission (FCC) Chairman Tom Wheeler (@TomWheelerFCC) in response to his call for comments regarding net neutrality.

Please take a moment to click here to read my original
Comment to @FCC on #NetNeutrality
blog post for background information for this post.
(This link will open in a new tab/window,
so you can still have this web page open).

In my July blog post, I recommended following the @FCC, @TomWheelerFCC, and @GigiBSohnFCC on Twitter, and watching the www.fcc.gov website for net neutrality information. I also suggested following the #NetNeutrality hashtag. I wrote that there "will be opportunities for additional comments up to September 10, 2014, per..."

.@sos_jr next we are taking reply comments up until 9/10 & then we reads all & start 2 figure out our course. #netneutrality

It is NOW September! The date for submission has been extended to September 15th! Time to take action!

Here is information on how to send your comments to the Federal Communications Commission (FCC) about net neutrality:

RT @FCC: 9/15 deadline 2nd round of #OpenInternet comments is quickly approaching. Submit via openinternet@fcc.gov or http://t.co/ol3Uk7X2xa

Gratified by all the feedback on #netneutrality. Almost half a million emails have come in to our openinternet@fcc.gov inbox so far.

Once at the new Electronic Comment Filing System at http://apps.fcc.gov/ecfs/ please use either Submit a Filing and enter that for "Proceeding 14-28" or use the Submit a Filing (Express) for "14-28 Protecting and Promoting the Open Internet."

I recommend learning more about the role of the Federal Communications Commission (FCC) in regard to the #OpenInternet & #NetNeutrality.

Definition by the @FCC of #OpenInternet & #NetNeutrality at: http://t.co/Sq0qocAV37 pic.twitter.com/V4YMhyIVrw

We are fortunate in Cleveland that Special Counsel for External Affairs, Office of the Chairman, Federal Communications Commission Gigi Sohn (@GigiBSohnFCC) is coming to town to be honored and to present at the OneCommunity (@OneCommunity) annual meeting on September 10, 2014.

Here is a link with more details and information on how to register: OneCommunity.org/annual-meeting-announcement

Our Annual Meeting is around the corner. September 10. Gigi Sohn honored and keynote. http://t.co/arrp9ipwUf #OneCommunity #BigGig

How does The Collection Auto Group use #OneCommunity? Find out at our Annual Meeting. September 10. http://t.co/VPDPwnZUu5 #BigGig

I believe that the support of net neutrality is an important issue, so I contacted President Barack Obama, my Senators (Sherrod Brown and Rob Portman) , and my Congresswoman (Marcia Fudge), with a message asking them to support action to have the Federal Communications Commission reclaim its authority to enforce net neutrality rules.

Members of Congress for all states can be found at:

Use this map to find your congressional district

You can embed this map from:
GovTrack.us/congress/members/map

For Ohio, call or write:

Where I live, my US representative is:

I want to take this opportunity to thank my representatives for writing back to me. I have heard from everyone except for President Obama, and provided their replies as PDF files for your reading pleasure. Please click on the following image links to read these responses. Please, after reading these, contact your representatives to ask for more action. 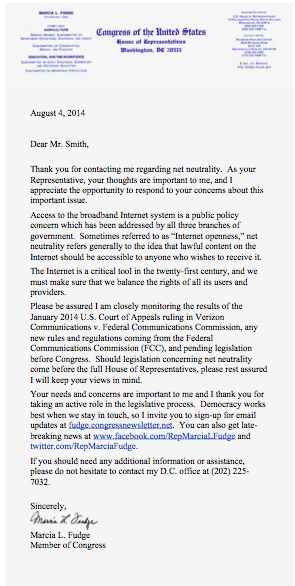 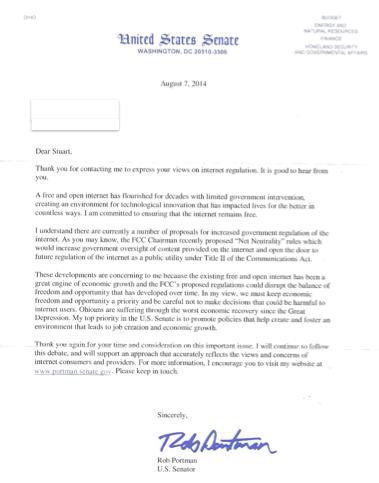 As I wrote in July, "I am very surprised that the FCC is even debating net neutrality. It seems to me that net neutrality should be something that the FCC would be pushing for all along." Now is your chance to let the FCC know how you feel abou this issue.