It was great to be able to attend the TechPint Akron II - "And All That Jazz" event at Jilly's Music Room in downtown Akron, especially after I had featured one of the speakers, Eric Wise, in my TechPint Cleveland III blog post.

I had never been to Jilly's Music Room (JillysMusicRoom.com - @JillysMusicRoom), but after checking out the ReverbNation website, I was interested in seeing their venue.

Here is the desciption from the TechPint Akron II - "And All That Jazz" website of the two presenters.

Eric Wise (@ESWise)
Software Craftsmanship Guild (@SWCGuild)
Research from Harvard Business School suggest that the odds are not with you and that 75% of start-ups fail. The Lean Start-up methodology offers ways to help reduce that risk by evangelizing experimentation over rigid planning, customer feedback over intuition, and iterative design that allows for pivoting quickly. In this talk we will explore some of the high level concepts of Lean Start-ups and use Eric's experience with the Software Craftsmanship Guild as one example of how the approach can pay dividends.

I am very pleased that my good friend, Gaurav Narain Saxena aka: "G" (@gsvolt), suggested I include the videos and photos he took of the evening. I recommend seeing more of G's videos of tech events in Northeast Ohio on his do the needful, write about it, simple blog, and reading his post on TechPint II Akron.

I am very grateful to Eric R. Patalinghug (EricReplied.com - @EricReplied), who took photos during TechPint Akron II. I reached out to him to ask if I could share his photos in this blog post, and he graciously wrote back, "Sure thing! Go for it!"

Ask and you will receive.

It is people like Eric, G, and many others who make coming to TechPint so great.I find that people in our community are so willing to help each other out. I really appreciate Eric's and G's assistance with this blog post.

Please see my March 8, 2014, Blogiversary: Two blog post, where I list the helpful leaders of 140 groups in our community, and make a recommendation on a "Call for action!" If we all contribute to helping each other and learning from each other, our whole community benefits. Anything you can do to share this list of 140 organizations on your favorite social media would be greatly appreciated.

Please read through these tweets and retweets to see photos and to share in the experience of the evening. To see more about both past and future TechPint events, please be sure to follow the #TechPint hashtag and tweets by @TechPintNews.

Tickets for #TechPint #Akron on 3/6 are still available! Register: http://t.co/pShA2T1O9f

Missed out on the first TechPint in Akron? The next one is happening next week! Register while there's still room: http://t.co/32w4uUoGFQ

Check out this handsome bunch of Akron tech entrepreneurs #TechPint. Join them on 3/6? http://t.co/BRzyPcxjf9

And we are sold out for #TechPint tonight in Akron! See you all at 6.

Find me at #TechPint II tonight. Will drink dark beer with @TechPintNews & share stories that #make me #happy http://t.co/Sm2FjgbcEO

The second #TechPint Akron is about to get started — who all is here? #startups #cle #NEohio pic.twitter.com/jlyWGpMxP3

Drum roll.., first t-shirt if the night given to..... ME!! For knowing @eswise last name! #techpint #uberexcited #winner

If your idea is straightforward, a mortgage is a great way to get collateral. If it is most speculative—use other ppls money #TechPint

"Good ideas are a dime a dozen, getting good guys to come along with it is the real challenge" —@RonSeide (@TechPintNews) #TechPint #startup

"If you want to be relevant in the modern tech space & attract top talent, you have to be cool" - @RonSeide #TechPint #corporations

Shortage of #tech ppl in NEO. Must treat ppl good to keep them. #techpint pic.twitter.com/b5B6q2Thm1

The best way to attract top talent is to just make a great place to work, don't get bogged down in bullshit — @RonSeide #TechPint

At #TechPint just learned about some exciting new happening in #Akron. Be sure to follow @osctechlab to learn more in the coming weeks.

Time to drive home. Thx @TechPintNews's #TechPint leadership for gr8 event in #Akron. Look forward to next one. pic.twitter.com/9Dd2vKCEZV

TechPint Akron II - "And All That Jazz" event was made possible through the following supporters:

Thank you to all of these sponsors for making it happen.

After the TechPint event, I was fortunate to get a tour of the new location of SYN/HAK, The Akron Hackerspace by leaders of the hackerspace, G (@gsvolt) and Torrie Fischer (@tdfischer_).

I had toured their old location last November 2nd (learn more in the Akron Mini Maker Faire & SYN/HAK The Akron Hackerspace Open House blog post), so was excited to see the new expanded "digs." The new space has an expanded area for the machine shop, meeting rooms, and an unfurnished basement which will allow for future growth. A full list of the new location's resources can be viewed on the SYN/HAK "What We Offer" web page.

If you are interested in creating a hackerspace like the one in Akron, Torrie Fischer (@tdfischer_) let me know that the SYN/HAK leadership is committed to providing open source access to the documentation needed. G (@gsvolt) sent me this link to SYN/HAK Documents at: http://static.synhak.org/documents/

Interested in how a hackerspace like @SYNHAK in #Akron is set up? @tdfischer_ & @gsvolt has info to help U! http://t.co/LgnlM3O5n0

The next "mini-tech conference, in a bar, with pints" will be the fourth gathering in Cleveland of the region's entrepreneurs and investors at 5:00 p.m. on Wednesday, April 16th, at the Agora Theature (@ClevelandAgora). These events tend to sell out, so purchase your tickts soon if you don't want to miss out!

Here is a March 13, 2014, message sent from TechPint organizer Paul McAvinchey -- click on links in the PDF for more information. 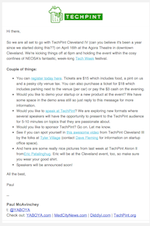 To make it even more exciting, the next TechPint Cleveland IV is part of NEOSA Tech Week. To learn more, follow Brad Nellis @NEOSA_Nellis on Twitter, and see the full calendar of activities at: NEOSAtechWeek.com/calendar.aspx 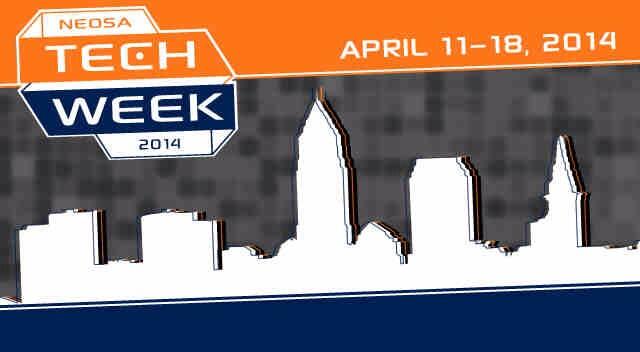