TechPint Winter 2016 at the Museum of Contemporary Art (MOCA) Cleveland 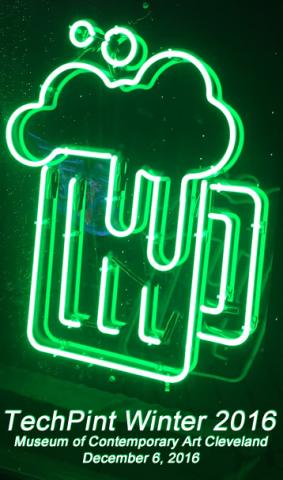 TechPint Winter 2016 was held at the Museum of Contemporary Art Cleveland (@MOCACleveland) on December 6, 2016. I have gone to other events at the museum, and attend many of their exhibits throughout the year -- it was a great location for this entrepreneur event.

As my way of thanking the TechPint (@TechPintNews) organizers for such a great event -- I really had a great time connecting with many people there -- I have created this blog post, which captures some of the tweets and resources from the evening.

Here is the official TechPint Winter 2016 agenda from the evening:

ICH BIN EIN CLEVELANDER. Join 100s of startup founders, investors and advocates for a night of inspiration, connections and pints.

TechPint returns on Tuesday, December 6th at MOCA (Museum of Contemporary Art) in Cleveland. The event will kick off at 5:30pm and feature local startup heroes sharing their stories (with a special focus on design), startups showcasing their latest work and plenty of pints.

Over 2,000 people have attended TechPint over the past 3 years. Each event has been a special one in its own right, and the next will be no exception. Expect plenty of Berlin-Techno-Art inspired shenanigans. Stay tuned for news about awesome speakers, an expanded Demo Pit and more surprises.

Fun n' Games ('til someone loses an eye) 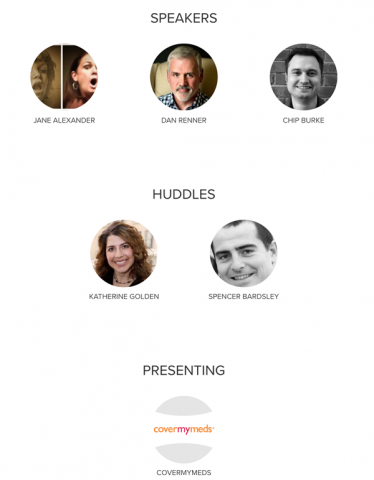 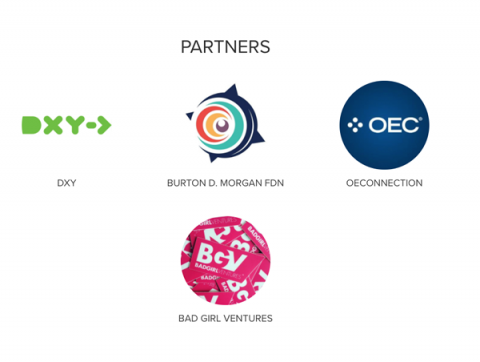 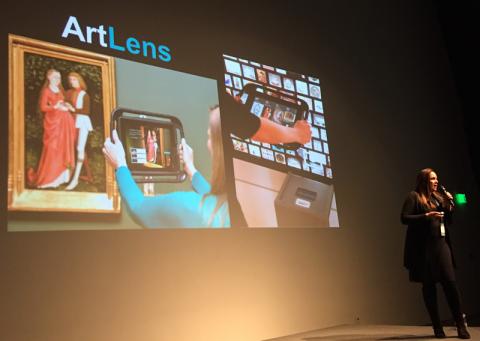 The event started with the Cleveland Museum of Art's (@ClevelandArt) Chief Information Officer Jane Alexander (@JaneCAlexander) presenting some of the incredible things happening using technology at the museum.

Here are links to the Cleveland Museum of Art's website to learn more:

I recommend viewing this Studio Play | The Cleveland Museum of Art video to learn about recent developments:

I was very fortunate to attend the pre-opening of Gallery One in 2012 (see my blog post), and recently visited the museum (see my blog post) because I was intrigued by the video @JaneCAlexander shared on Twitter:

Here are the Tweets:

Play, create, connect, and dive deeper into the CMA’s collection in #StudioPlay https://t.co/7KkgSyLtLu

At the time of the Gallery One opening, I was very impressed with this first-of-its-kind interactive technology resource for visitors in a United States museum. It was great to attend TechPint and learn directly from Jane Alexander about recent developments at the museum. I invite you to learn more in my blog posts: 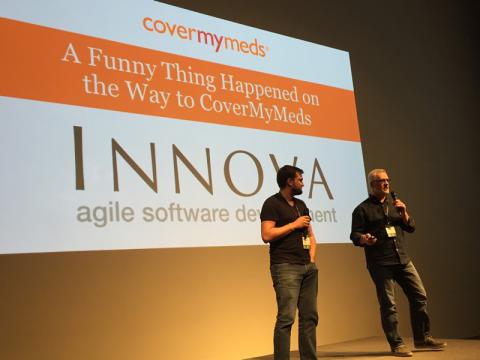 The Chip Burke and Dan Renner (@DanielRenner) opening talk, and later their Huddle #4: Q&A, were very interesting. They shared how important the company culture is to the success of Cover My Meds (@CoverMyMeds). Be sure to see my photos and tweets from their talk to learn more.

Our core values are essential to accomplishing our mission. Our culture is defined by what we do, not what we say. So while we are proud of our mission and core values, these are not just nice things to have in our lobby. Living these ideals is an essential part of our work at CoverMyMeds.

Our work is serious, but we should not take ourselves too seriously.

You do not have to look or think a certain way to be successful here. We embrace inclusiveness and diversity, and count on solutions coming from everyone in the company.

We value results rather than politics. While we do not always agree, we are respectful of each other’s views and the decisions we make. Once a decision is made, we commit and move to win as a team. We celebrate our victories and have fun with our colleagues.

We treat people like adults and always behave with ethics, integrity and honesty, beyond question.

Making a tough decision or being the bearer of bad news is always OK at CoverMyMeds. When presented with a decision that is more gray than black and white, we use our best judgment, get help when needed, and ask ourselves what best contributes to the needs of patients and our customers.

Sometimes doing the right thing means taking a short-term hit. But by consistently demonstrating that our customers and employees are more important to us than anything else, we believe they will return the favor if we ever have a short-term problem.

We communicate honestly, clearly and maintain a sense of humanity in our company. We treat people with respect and maintain their dignity even when we disagree. We never tolerate jerks, even if they are brilliant.

Achieving our mission requires us to do things that have never been done before. We embrace this, knowing there will not always be an easy answer, or someone to tell us what to do.

We are transformational in our thinking, questioning the limits of what is possible by asking “why not?” “why not now?” and “why not bigger?” We value employees with the grit and willingness to do whatever it takes to figure it out and make it work.

Lasting success requires that we use our resources wisely, so we particularly cherish those with the judgment to understand what rewards justify their risks.

We care intensely about the achievement of our numbers, milestones and product excellence. No strategy, process, organization, team or person is sacred if we are not getting the job done.

Reliability and peerless security are the most fundamental results we must always achieve. We manage risks continuously and do whatever it takes to avoid problems.

Customers love that we are different, but only when we deliver. We earn the right to challenge the status quo by accomplishing what we say we will.

We do not trick ourselves by setting easy goals just so that we can achieve them. Exceptional results are needed to provide career growth for our employees, profits to invest in our mission and competitive distance that provides us with lasting success.

We recruit and promote people who want to win as part of a great company. We check our egos at the door and win as a team.

People get ahead at CoverMyMeds through ambition for the company and our mission, and never through politics.

See the tweets and photos below for information about the rest of the evening's activities.

I want to note that TechPint leader Rakesh Guha (@guharakesh) did a great job emceeing the TechPint Pitch Improv. I even participated by joining We Can Code IT CEO Mel McGee (@MelKMcGee) on stage. 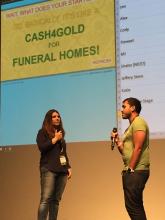 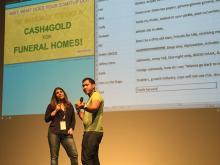 Thank you, Paul McAvinchey (@YABOYA), for sharing your TechPint Facebook video that shows the energy of TechPint.

Here are my photos from the evening:

Please take a look at the 81 tweets and retweets that I shared regarding the evening. I provide them to give an overview of TechPint Winter 2016. Please share those that are of interest to you by retweeting. Thank you.

#TechPint is back on 12/6 in Cle! Support your local startup community and hear from its founders. https://t.co/YxX3I3tr8z @TechPintNews

If you've never been to @TechPintNews get $5 off with code NEWBIE. Next up Dec 6th @MOCACleveland. See you there! https://t.co/ict9qCYFGg

#TechPint returns to #CLE next Tuesday 12/6, here's the full lineup of speakers and shenanigans https://t.co/XRbAcawmPF

If you enjoyed #Flight2016, you'll love @TechPintNews coming up tomorrow night! https://t.co/dDEykipygS Hope to see everyone there!

Come check out my game @ArtClubGame tomorrow at @TechPintNews at @MOCACleveland. Tech Pint is an event you don't want to miss! See u there!

I just sent an email to a person who is interested in @TechPintNews's #TechPint letting them know tickets status: https://t.co/0O88uMSb4y

TE team members are headed to @MOCACleveland tonight for #techpint. See you there #Cleveland? pic.twitter.com/Tv5Ixr59cz

@janecalexander is doing amazing things to make art experiential at @ClevelandArt - so lucky to have this here in #CLE #techpint pic.twitter.com/FrFu0TY42d

"Listening is one of the most important things we can do" <3 @CoverMyMeds #TechPint pic.twitter.com/i2LsQpXlBc

Enjoyed it as well! Nice seeing you, Stuart! https://t.co/6Jox1XkFqe

.@TechPintNews Since I attend #Cleveland #tech events, I have noticed how @CoverMyMeds is great at sponsoring local tech mtgs. #TechPint. pic.twitter.com/Rk7VUeri0L

@ZormStorm @sos_jr not fair! I got like, no guessing time!

...and @CoverMyMeds is created!

Smart, innovative, out of the box thinkers @TechPintNews come to @ClevelandArt in January and help test the future #prototype #galleryone2.0 pic.twitter.com/eCpHV1dmu2

Glowsticks & drinks? I MUST be at @TechPintNews! Representin' @launchleague as usual, listening to a great talk by @CoverMyMeds now! pic.twitter.com/S7nMrBi4lg

Too busy at #TechPint having fun talking to #tech ppl -- now time go up at @MOCACleveland for tech huddles.

Love her and her genius ideas. #GalleryOne continues to be ahead of the curve even now. https://t.co/HdkPoCwNow

I thought this was Cuddles with Chip & Dan. Huddles will do! @CoverMyMeds #TechPint pic.twitter.com/3QmT2KOxr1

Companies are built & composed by networks of people. Trust is vital #TechPint

I even got on stage to do some Improv Pitching. pic.twitter.com/IqHlPU1p0m

Always a good time with @CoverMyMeds! Thanks for sponsoring a great event! #techpint pic.twitter.com/78FnT844MQ

Thx @ReneeDeLuca for making a point to introduce yourself. Great to meet U in person at @TechPintNews #TechPint.
Thx also for @sharewik info

.@daniel_dudley Good to see you tonight.

Great that @JarrydHuntley was able to show his game software: https://t.co/3BZQlEMt47

@TechPintNews great speakers, food and of course- beers. Shout out to @CoverMyMeds pic.twitter.com/9ZpuII5lv6

To learn more about TechPint, please read these other blog posts:

Since this TechPint took place at the Museum of Contemporary Art Cleveland (@MOCACleveland), I want to mention these two blog posts:

"MOCA" is also mentioned in other blog posts.