I was fortunate to attend TechPint Cleveland V: Winter Jam on January 22, 2015, at the Beachland Ballroom (@BeachlandCLE). As the name implies, this was the fifth TechPint in Cleveland (there have also been Akron TechPints).

As in the past, the interesting location is also part of the draw of the event. Beachland Ballroom allowed for a creative atmosphere. With tickets sales exceeding 300, it was great that the Beachland Ballroom was able to open their back room to accommodate an additional 50 attendees. I heard that TechPint came very close to selling out all 350 tickets -- a big congratulations to the TechPint leadership team!

From the TechPint.org website, TechPint Cleveland V: Winter Jam is:

A POPUP TECH CONFERENCE. IN A BAR. WITH PINTS.

Over 300 of Cleveland's most active entrepreneurs and investors meet on January 22nd to mix, share ideas and get inspired. The event kicks off at 4:30PM with a pint-fueled pitch competition from Flashstarts, followed by enlightening conversations with two awesome entrepreneurs and a party that will go on late.

Here are my photos from the evening. Be sure to look at the photos from others, and links to more photos, in the tweets below.

Unfortunately, a family emergency had me leave early and in a rush. Thus, I did not have a chance to see all the exhibits and the demo pit, and to congratulate the TechPints leadership team in person.

As with past TechPints I have attended, this one was full of energy and optimism as Cleveland area entrepreneurs shared their stories. I am writing this blog post as my way of thanking the leaders for making this resource happen in our community, and to encourage others to spread the word about this event.

If you don't know about Bizdom Cleveland's (@BizdomCleveland) work, you really should take the time to meet Anna Sauber-Buchholz (@AnnaOfCLE), who was staffing their booth. Bizdom Cleveland is a nonprofit startup accelerator that provides seed funding and intense mentorship to entrepreneurs looking to launch and grow innovative, tech-based startups in the downtown.

I do want to mention here that I have some interesting videos of MakerGear (@MakerGear) 3D creations in action. If you want to learn more about MakerGear, please see my videos in the Codemash 2015 - Part 1 of 2 blog post that I published earlier this week. There, you will be able to hear the MakerGear 3D Printed Violin and see the MakerGear 3D Printed Multi-Rotor Copter in flight.

I can't express enough my praise for Flashstarts (@Flashstarts) for organizing the Second Annual "Pitcher" Night. All who attended should appreciate Flashstarts' investment of their time to review all of the 2-minute pitch videos that were submitted and promote this event, as well as provide the $2,000 cash award.

The emcees that night were FlashStarts Co-Founders Jennifer Neundorfer (@jkk) and Charles Stack (@cstack), who did an impressive job of making this part of the evening very lively. (Learn more about them in my February 2, 2014, TechPint Cleveland III blog post, where Charles Stack was the featured speaker, and my October 27, 2014, Cleveland Amplify Panel & Tech Town Hall blog post, where you can view the video of Jennifer Neundorfer's presentation on the Cleveland tech panel.)

The selected winners for the night were: 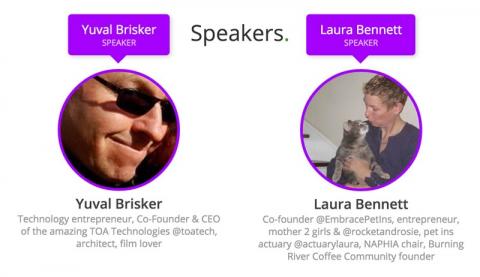 Here are the official bios of the main speakers, that TechPint founder Paul McAvinchey (@YABOYA) emailed out before the event:

Laura Bennett
Laura is the co-founder of Embrace Pet Insurance, a Cleveland startup disrupting a very rusty industry. This company has been battling for a few years now against an array of tricky regulations and an uneducated market with huge potential, but Laura has always had an eye on building longterm value. And now the fruits of this effort are showing with new investors coming on board last year and the company employing 40 ... 50 ... 60 people locally and counting (every time I mention the number I'm told that it has gone up).

Yuval Brisker
Yuval is the co-founder of TOA Technologies which was recently acquired by none other than Larry Ellison's Oracle. This has to be one of the biggest success stories our community has seen in recent years and Yuval will be digging into this experience and sharing some of the challenges and subsequent learnings he picked up a long the way.

Regarding Embrace Pet Insurance, it was interesting to learn a bit about what it is like to become an entrepreneur in the field of insurance -- especially something as unique as pet insurance. Also, I always find it interesting to hear from business owners how their target market morphs as the business changes and grows. A most interesting case study.

Comprehensive Coverage
Our [Embrace Pet Insurance] approach to coverage means offering your pet nose-to-tail accident and illness protection for the unexpected plus the option of adding Wellness Rewards for routine veterinary care. What does Embrace coverage include? We provide one simple yet comprehensive plan to cover your dog or cat against unexpected accidents and illnesses. You can choose your annual maximum, deductible, and reimbursement percentage. No matter how you personalize your policy, your pet will enjoy coverage for the following: ...

TOA Technologies -- a service that directly addresses a need -- a formula for success! To be able to schedule that service/repair person to come when it is convenient to me is priceless.

TOA Technologies provides the only enterprise-grade, on-demand mobile workforce management solutions
Field service management software has been around for many years. However, most companies with mobile workers are using outmoded software on legacy platforms that have not fundamentally evolved in 25 years, or they are using manual processes with no automation at all. We provide a state-of-the-art mobile workforce management solution that runs 99.996% of the time, requires no installation or maintenance, is completely configurable, does not have any associated license fees and delivers a new paradigm for managing people in the field.

Here are my @sos_jr tweets and retweets for the evening. Twitter is always a nice way to see photos and resources shared by others at a meeting. Be sure to look for more #TechPint event information by following @TechPintNews.

Who's going to #TechPint Winter Jam this Thurs, 1/22? We'll be there! Get your tickets today: http://t.co/NaQLujmko6

A Popup Tech Conference. In a Bar. With Pints. @TechPintNews http://t.co/CSKJF2bnqN

Thrilled that it's going to be another sellout #TechPint crowd. 37 tickets remaining. http://t.co/W8EUHV7yFa

“@TechPintNews: Thrilled that it's going to be another sellout #TechPint crowd. 37 tickets remaining. http://t.co/o8Puz6MPdv” Join Us!

Are you coming to #TechPint tonight @ 4:30pm? You should-- there are a few tickets available: http://t.co/tdkAEfrXy0 @TechPintNews

5pm @ #TechPint Pitcher Night: 5 #startups will pitch their game-changing ideas for a shot at $2k. #willwinnertakeall?

BREAKING: Anyone breathing with their own startup idea here at #TechPint can be our 6th contender for Pitcher Night. Come to the stage.

Going for drinks? A business lunch? @wheedleapp has restaurants bid for your patronage once you describe your outing. #TechPint

PolitiApp seeks to solve the problem of low poll attendance of discouraged #Millennials with a simplified mobile ballot. #TechPint

With PolitiApp, politicians can reach Millennials where they are. Talk to @NzingaHart to learn more. #TechPint

FreeD works as a match-making marketplace to connect businesses with the right manufacturer. Talk to @SNicol6 to learn more. #TechPint

Repping BLP KSU at #TechPint pitcher night! We are so happy and proud of Nzinga, Matt, and Spencer! http://t.co/UHxIxNpd0g

PolitiApp wins $1000 for 1st place! Congrats to all who participated! #TechPint

This man turned his house into an indoor paradise for his rescued cats - we love this! http://t.co/fUqKMZH1zz

Braving the cold for Techpint? Questions for the speakers? Submit them now and get a glance at the power of <remesh! pic.twitter.com/yj502LYogS

Great question on @teamremesh about the CLE tech community. And great insight from @YABOYA "You don't have to ask permission. Just do it."

Paul and Yuval at #TechPint - what drove him? Passion for technology and passion for people. pic.twitter.com/Ken6fW45x1

We are at #TechPint! Listening to TOA CEO, Yuval Brisker. pic.twitter.com/YnivNH5moy

listen to your clients, they may be the inspiration for your next #bigidea #techpint

"It's the inevitable that brings about the possible." - Yuval on how to approach "radical ideas" at #TechPint

Yuval of Toa #Techpint. It's all about perseverance

Had to leave TechPint early to help family member - basic 1st aid not successful-- now in emergency room. It will be a long evening.

Just got home and doing my now traditional browse of all the great #TechPint stuff online. What a great night! Thank you all!

.@rustbeltrachel Great! I look forward to reading in detail this article about Net Neutrality. Good talking to you at #TechPint last night.

Thank you much to everyone who joined us last @BeachlandCLE for #TechPint Winter Jam! #StartUp pic.twitter.com/xDMS8yQi1J

I am so happy @LaunchPad_KSU is in my life! I've met some of the most enterprising people with great ideas! @Flashstarts

Big thanks to @TechPintNews @LaunchPad_KSU and @Flashstarts for the chance to speak about Free-D last night! Can't wait to do this again!

You can see what happened at last night's #TechPint here (scroll down): http://t.co/pfAkqi4JyJ

A great point was brought up by @laurabennett at #TechPint - it takes active entrepreneurs to make things happen. So do it! (I can help you)

Organizing #techpint is some hard work but is pretty straight forward. Date + theme + people. + beer. Someone send an invite to something!

Thanks @ericreplied for taking these great pictures of #TechPint V: Winter Jam in #CLE. http://t.co/VI51tHu3kF

.@rustbeltrachel Here are the 2 #NetNeutrality blog posts I mentioned to U at #TechPint: http://t.co/Nx2UCergjL Still waiting for FCC action

Here are links to the my two past TechPint blog posts for your review:

I hope to see you at the next TechPint!