I have been writing blog posts about Ingenuity Cleveland's IngenuityFest since 2012, and attending long before that. IngenuityFest is the perfect marriage of my interests in arts and technology.

I went to all three days, October 2-4, of IngenuityFest 2015. I am sharing my photos and tweets from the weekend in this blog post as my way of thanking all the presenters. I made a point of talking to many artists in their installations, and local tech leaders at their booths. I can't include everyone I spoke to, but will mention a few in this post.

I have also included my tweets from the inaugural Hingetown Hoedown, which took place Saturday night. It was incredible to see so many people attend this first-time event!

For this 11th year of IngenuityFest, Ingenuity Cleveland (@ IngenuityFest) had the theme of transitions. Here is the information from the IngenuityCleveland.com website:

THE 2015 A NEW FESTIVAL FOR A CHANGING CITY

OUR 2015 FESTIVAL THEME IS “TRANSITIONS,” SIGNIFYING THE CLOSING OF A DECADE AND OUR EMERGENCE IN A NEW ROLE FOR A CHANGING CITY. THROUGH A STRATEGIC PLANNING PROCESS, WE’VE BECOME A YEAR-ROUND ORGANIZATION COMMITTED TO DEEPENING OUR TIES TO THE ARTISTIC, INNOVATIVE, AND SERVICE COMMUNITY IN CLEVELAND. WE’RE NOT ONLY DEDICATED TO SHOWCASING THE VERY BEST, BUT TO HELPING IT GROW AND THRIVE ACROSS SECTORS, FROM EDUCATION TO INDUSTRY TO ARTS AND ENTERTAINMENT.

Ingenuity Cleveland became a year-round program, more than just their annual IngenuityFest weekend event, a few years ago. It will be interesting to see how they plan to move from showcasing Cleveland's arts and innovation to assisting in their growth. 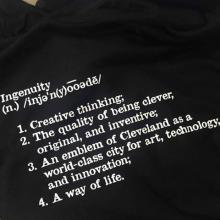 Review the IngenuityFest 2015 Program to get an overview of the planned actvities for the weekend, and the list of sponsors. 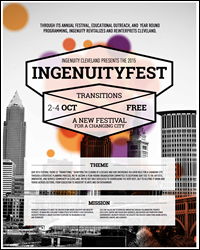 Here are my @sos_jr tweets and retweets which show some of the pre-event promotion, videos, and articles.

Here are my photos and videos from Friday night:

Here are my @sos_jr Friday night IngenuityFest 2015 tweets and retweets. Please share any photos and videos that you find interesting by retweeting.

There was so much happening at IngenuityFest 2015. I hope you enjoy these videos and photos of the day.

Saturday night, I decided to take a break from IngenuityFest 2015 and see the inaugural Hingetown Hoedown (@HingetownHoedwn)! I was not sure what to expect, since it was the first time for this event, and it was raining. When I got there, I was truly "blown away." The place was absolutely packed!

During the rain, people made use of pop-up tents to enjoy the music and great food from local food trucks. Once the rain stopped, people were dancing in the street. The area in front of the stage was filled with people enjoying the music.

Here is the official description of the first Hingetown Hoedown event:

Our vision is to provide the public with a free, family-friendly (and animal-friendly) music festival transplanted from the Appalachian backwoods and dropped smack dab in the middle of a Cleveland intersection. Born from a love of stringband music, and built on the rising tide of outstanding local businesses and generous individuals, the Hingetown Hoedown brings sweet folk, bluegrass & newgrass sounds to the blossoming Hingetown neighborhood in Ohio City. Going beyond creating a great music festival, it is our mission to promote sustainability, showcase local start-ups and businesses, and strengthen the bonds of our community.

With eight amazing main stage bands and four daring Picnic Table Stage bands, craft beer, local food trucks, a variety of vendors, fun family activities, and over 1500 attendees (in the pouring rain, no less), the first Hingetown Hoedown was a roaring success. We’re looking forward to year two in the Fall of 2016, and we’d love for you to be a part of it!

Congratulations to the Hingetown Hoedown organizers for such a successful event!

I see on their website HingetownHoedown.com that there will be a second annual hoedown in Fall 2016. I recommend you sign up on the website for more informaton and follow @Hingetown's @HingetownHoedwn on Twitter -- yes, I was very impressed by this event. Based on what I saw, it is already is a must-attend event in Cleveland.

After the Hingetown Hoedown, I returned to IngenuityFest 2015 for some late-night exploring. Due to the rain, there were only a few people enjoying the band.

Here are my photos of IngenuityFest after dark:

Here are my @sos_jr late-night Saturday IngenuityFest 2015 tweets and retweets:

On Day 3, the weather cleared and the crowds increased.

You can also learn more about Ingenuity Cleveland (@ IngenuityFest) by reading my blog posts about the following events that I attended: