This blog post was originally intended to be a short description of a pleasant Sunday morning tour of part of the Flats area of Cleveland. However, as we learned more about Cuyahoga River-related developments, we kept finding additional important facets about which to write.

Here is a map showing part of our jourrney. Be sure to click on map pins to view photos and videos.

Please click on the map pins to view photos and videos.
Thank you @ShareTheRiver and Jim Ridge @ridgej for the videos! 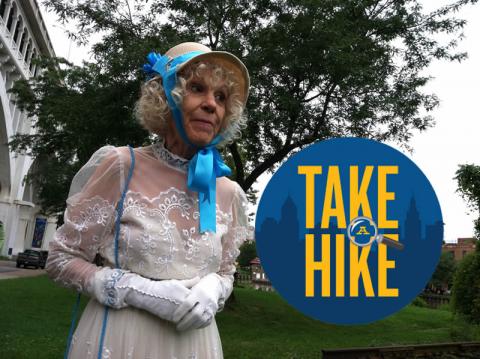 We were surprised by the large number of people gathered for the Historic Gateway Neighborhood Corporation's (@GatewayCLE) Canal Basin Park in the Flats "Take A Hike" Tour. We shouldn't have been surprised, though, because we knew how good these "Take A Hike" tours are from having already gone on the PlayhouseSquare District tour. (Please see our "Take a Hike" - Cleveland's Playhouse Square District blog post.)

Here is the description from the Heritage Tourism Take a Hike Tours web page of the tour we did:

Canal Basin Park in the Flats Tour
Every Sunday at 10 AM: Meet at Settler’s Landing RTA Station (1025 West Superior Avenue). Enjoy tales from the early days of Cleveland while learning about Moses Cleaveland, the Cuyahoga River, bridges, the historic B&O Rail Station and plans for a 25-acre park and the extension of the Towpath Trail. Be sure to bring your camera for some stunning photo opportunities. Mary Kelley may share stories of her husband, Alfred Kelley, the father of the Ohio & Erie Canal, during your tour.

Some of the highlights of the tour included:

Lunch By The River 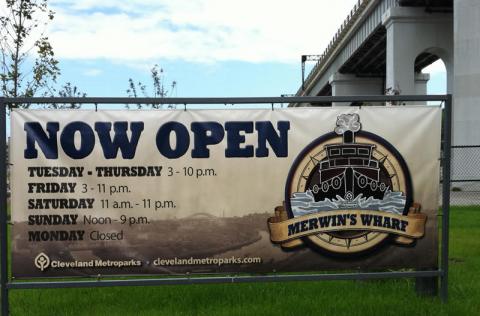 Our next stop was for a delicious lunch at Merwin's Wharf, the new restaurant developed by the Cleveland Metroparks. We had seen this area a few years ago at our first Brite Winter festival (@Britewinter), and were happy to see how the Cleveland Metroparks (@CleveMetroparks) had improved and expanded this urban park. Enjoying the great riverfront view, watching the Cleveland Rowing Foundation (@ClevelandRows) boats while dining, one would never know that you were in the middle of a major city.

Merwin's Wharf
Continuing in the tradition of one of the Flats' earliest tavern owners, Noble Merwin, Cleveland Metroparks is renovating its former café at Rivergate Park into Merwin's Wharf, an after-work destination and relax-by-the-river weekend bistro scheduled to open in late July 2014. This exciting new full-service restaurant features eclectic décor and a 3,000 square foot landscaped patio with firepit and fireplace overlooking the scenic Cuyahoga River at Irishtown Bend.

While enjoyng our meal, our Canal Basin Park tour guide, Ron, joined us and regaled us with more information about the area's past and exciting plans for the future. We appreciate the fact that Ron went out of his way to assist and educate us. At both the free "Take a Hike" - Cleveland's Playhouse Square District tour we attended, and at today's free tour, we were impressed with the high quality of guides provided by the Historic Gateway Neighborhood Corporation (@GatewayCLE).

We were also soon joined by Michael and Jill Christoff, who brought Michael's parents to Merwin's Wharf as a result of seeing our tweets about the restaurant. (Don't you just love how Twitter can be used to connect?) Michael (@mchristoff) and Jill are very involved in promoting creative Clevelanders through the great PechaKucha Night Cleveland (@PKNCLE) events. (Learn more at our AHA! PechaKucha Night Cleveland VOL 23 blog post.)

(See tweets below about the day for more information and photos.)

We had read so much on the Canalway Partners' (@CanalwayCLE) new website about the new Scranton Flats area, that we just had to bring our bikes to try out the new path. Currently, it is just a short stretch, but we can see the potential of this foothold of riverfront ecological development. It is the keystone section for future bike path development going north to Lake Erie and south through Ohio.

Scranton Flats
River access, greenspace, wildlife… all in the heart of the Flats
Scranton Flats, the first publicly funded section of the Towpath in Cleveland, is now open. On July 7th 2014, Scranton Flats was handed back to the people of Northeast Ohio. Gone are the pollution, dense and uncontrolled foliage, and abandoned marina. In its place are native plants that draw birds and wildlife, natural riverbanks designed to harbor fish, and, of course, the Towpath Trail. It is the first step in connecting the Towpath to downtown, and creating an uninterrupted trail that links Cleveland, Akron, Massillon, and beyond.

Embed your own official Cleveland Metroparks map from:
Maps.ClevelandMetroparks.com

To end our Sunday outing, we decided to visit the Cleveland Metroparks Ohio & Erie Canal Reservation and have dinner down in the valley. Unfortunately, the CanalWay Center was closed for the evening, but we enjoyed walking around the grounds.

Here are our tweets and retweets about our Sunday, August 17, 2014, day exploring the Cuyahoga River and Ohio & Erie Canal. Please be sure to view them, since they include the photos/videos of our visit to Cleveland's river, links to resources, and more fun events.

MT @CEO_CleMetParks: Please RT Merwins Wharf is open officially to the public. Please come and check it out! #food pic.twitter.com/HgKFM0skZE

One of the cool parts of Cleveland, the east bank of the Flats! Aloft hotel is a great place to stay!… http://t.co/uUnwXHCzUc

Looking for something to do check our #merwinswharf #thisisCLE #food #riverwalk please RT pic.twitter.com/ZHL9ym3he7

Tour guide from @CuyArtsC/@CanalwayCLE's Tour joined us at @ClevemetroParks' #MerwinsWharf. Shared more info about #CLE growth in this area.

... I worked in the forestry division of @CleveMetroparks while in college. Gr8 to see park's growth into new locations & services.

Lotsa folks chillin' on the Goodtime III passing by at #merwinswharf pic.twitter.com/sEPTz0dm1e

When we originally envisioned writing this blog post about our visit to the Cuyahoga River, we did not know what would happen two days later:

All we can say is that while we have enjoyed all the Cleveland Foundation 2014 centennial gift events, the gift of this Lake Link Trail is the greatest gift we can imagine! It will have a long-term impact on our community by creating a greenway tying our urban core to our local and national parks and beyond.

The following tweets and retweets contain links to more information about this exciting announcement.

.@CleveFoundation gr8 news! I was just at @CleveMetroparks' #MerwinsWharf on Sunday. I look forward to learning details of this #TCF100 gift

Come join us at #merwinswharf with @clevemetroparks for a community celebration going on now. pic.twitter.com/KeGBGHPgAN

A week later, Stuart returned to bike from Cleveland Metroparks CanalWay Center (@CleveMetroparks) to the newly renovated Cuyahoga Valley National Park Canal Exploration Center. Please note the Kurtz Bros., Inc. (@KurtzBrosInc) sign pictured in the following tweets that indicated that this area was reclaimed from a landfill for public use. The reoccurring theme to all the places visited for this blog post is how wastelands are now being converted to greenways for public use.

12 o'clock noon. After a morning of computer work, it is time for a change. Luckily we have so many parks in area.

"Only 27% of household waste is recycled" via @kurtzbrosinc sign on @clevemetroparks towpath. We must all do better! pic.twitter.com/cRpJ3exjRU 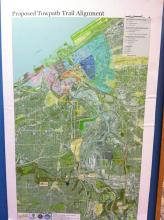 Stuart wants to thank the great Cleveland Metroparks CanalWay Center staff person who took time to review their map of the area and discuss how the new Cleveland Foundation support will further develop bike paths.

We recommend listening to this one-hour radio show and reading the following tweets about the show that was broadcast live from Merwin’s Wharf.

Our Exec Director Tim Donovan will be on @soundofapplause Wed 8/27, 2pm. Tune in to learn the latest on trail developments in the Flats.

At 2pm ET today, tune in to @soundofapplause which will include a spotlight on CRF: http://t.co/DGCvDtYxZ9

#DeePerry @soundofapplause hear from @CanalwayCLE & @tpl_org about having green space w/ in few minutes of all. Towpath opening new areas.

Excited to attend the Work It Cleveland! networking event tonight. Thank you, @WorkItCleveland, for the tickets

After listening to the show, be sure to see the links on the Sound Of Applause - Live Remote: Merwin’s Wharf web page for additional information.

We are very fortunate to have been among the 6,000 Clevelanders who received free tickets to a free educational cruise on the Goodtime III. The Goodtime III is Cleveland's largest excursion ship. The cruise will showcase the Cleveland Foundation's role in projects improving access to the river and lakefront.

For the Cleveland Foundation Weekends on the Water, the foundation is joining forces with several partners to make the event a unique learning tour for families. A special cruise narration will highlight some of the recent exciting development along the river and lakefront. Also, representatives from the foundation’s September gift partners – Cleveland Metroparks, the city of Cleveland’s Office of Sustainability, The Nature Conservancy and Northeast Ohio Regional Sewer District – will be on board during the cruises to answer questions and to provide educational materials on topics such as local water quality and conservation efforts.

Note that since the tickets sold out in 45 minutes, the foundation has made arrangements for the Goodtime III (@GoodtimeIII) is offering a special discount for a cruise next year in honor of the Cleveland Foundation. Save $3 per adult/child ticket for any narrated lake-river tour in 2015 with code TCF100.

Tix sold out. If you missed out, @GoodtimeIII offering discount on 2015 cruises. $3 off per adult/child for lake-river tours w/ code TCF100

#tcf100: The Cuyahoga River's past is one of promise, pollution, progress. Our perspective: http://t.co/aDt5beCU7A pic.twitter.com/ujdFe44jIc