Every year, because of my personal history, I always think that April 7th is a special day to explore a trail! So when I saw Bike Cleveland's (@Bike_CLE) tweet announcing that on Saturday, April 7, 2018, the Rails-to-Trails Conservancy (@RailsToTrails) would have a Cleveland location for its annual Opening Day for Trails (#RTCOpeningDay), I knew that I would need to attend! 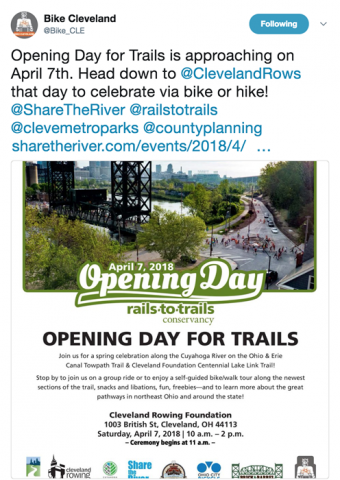 As I learned more about the day from Share The River's blog, and very informative @ShareTheRiver tweets, I grew more impressed with the strong partnership of organizations in Cleveland that were coming together on April 7th to promote trails and good environmental stewardship in northeast Ohio. The day's activities were hosted by the Cleveland Rowing Foundation (@ClevelandRows).

Reading about the Facebook event, 2018 Opening Day for Trails - Cleveland, also excited me by mentioning the Ohio & Erie Canalway (@OECanalway) Towpath Trail and the Cleveland Foundation Centennial Lake Link Trail (@CleveFoundation). I have enjoyed exploring both of these trails, and writing about them in some of my past blog posts.

Check out this great information from Share The River's Rails to Trails Conservancy's Sixth Annual Opening Day for Trails! blog post and video about the event:

Upon arriving at the 2018 Opening Day for Trails Cleveland event, I was impressed by the vast array of local organizations working to improve our community! Their respective missions complement each other, and through a variety of collaborations, they are accomplishing great things!

Here are the northeast Ohio organizations I saw at the event, and information I learned about them.

Sainato's at Rivergate (@SainatosRGT) had a booth at the event where I purchased my pizza lunch. It was interesting to talk to them and learn about the businesses in the Rivergate Park (@RivergatePark) area. "Rivergate Park is the new home for water-based activities on the Cuyahoga in The Flats, including Rowing, Dragon Boating and Kayaking." See the Rivergate Park map on the Downtown Cleveland Alliance (@DowntownCLE) website. 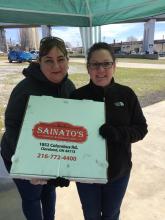 It was great to have these statewide and national organizations sharing trail information on a grand scale: 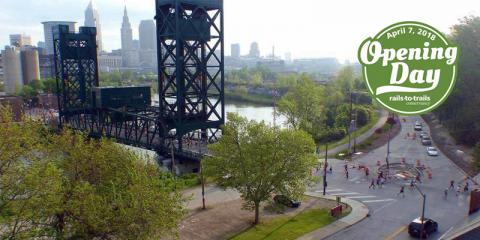 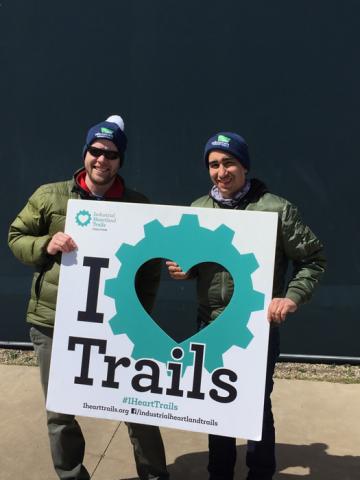 Here are my @sos_jr tweets and retweets sharing my 2018 Opening Day for Trails - Cleveland experiences. Please share any photos and videos that you find interesting by retweeting them.

Didja know Cleveland is one of six cities featured in @railstotrails national #RTCOpeningDay this Saturday, April 7? See you at @ClevelandRows! https://t.co/hEEAzKnhoH

The Cleveland edition of @railstotrails' Opening Day in this Saturday starting at @ClevelandRows at 10 am! @Bike_CLE has put together some nifty maps for your walk, run or bike! pic.twitter.com/jm8EBrY8Pr

Saturday morning is the @railstotrails Opening Day for Trails event and we will have maps at our table if you need some help choosing a simple route. Plus, we'll have the @NOACA_MPO Cuyahoga County maps too if you're itching to head out a little farther. https://t.co/bKPomagvhS pic.twitter.com/12IDtnZEC5

Join us outside for Opening Day for Trails (April 7) to celebrate trails and the springtime! Pledge to participate in #RTCOpeningDay for a chance to win great gear courtesy of @FujiBikes, @performancebike, @KEEN & @TopoDesignsUSA @patagonia: https://t.co/7G40JTUyZe! pic.twitter.com/VhPMfHH4Oa

Opening Day for Trails is only 1 day away! Get ready by:
Finding an event https://t.co/5DjzUIEfjE
Pledging to join the celebration & you'll be entered to win great trail gear!
Encouraging others to take part using #RTCOpeningDay! pic.twitter.com/zclkTZstr2

Tomorrow, stop on by and join in the @railstotrails 6th annual Opening Day for Trails. Tour the boathouse and then run ️, hike ️, bike etc on the trails in the area. It all starts at 10am!! #RTCOpeningDay

A chilly start to the morning! The average high keeps creeping upwards (mid 50s now), but we cannot seem to get close. Today will be another day with temperatures nearly 20 degrees below normal. #ohwx #pawx pic.twitter.com/XrSOfOLdPN

Today at 10:30 am ride your bike with a friend to the spring celebration along the Cuyahoga River on the Ohio & Erie Canal Towpath Trail & Cleveland Foundation Centennial Lake Link Trail! https://t.co/RLLtACapOD pic.twitter.com/7tfnzxKnaV

Tweets from after I arrived at the 2018 Opening Day for Trails Cleveland event:

I love watching the rowing. So "liquid" and smooth to watch. Have fun! https://t.co/6SLYusV7NR

At #Cleveland #RTCOpeningDay
I talk to @ClevelandRows Exec Dir about how @CleGiveCamp builds FREE #websites to #nonprofits!

At @ClevelandRows for the #Cleveland #RTCOpeningDay exciting to meet the @RailsToTrails Dir of #Trail Dev for Midwest Eric Oberg again to learn about good news for Cleveland!#Bike trail between #Ohio & #Pennsylvania and #WestVirginia is being built and research!#ThisIsCLE pic.twitter.com/nUmIvEfAzS

10 year mission to build a green city on a blue lake!https://t.co/x7OurnB1N0https://t.co/wGpzoF6VTq#ThisIsCLE pic.twitter.com/KBKlDvWEB9

Get down here to the #CuyahogaRiver to tour the @ClevelandRows facilities!

Thanks for all the great coverage!

I’m having lunch from @SainatosRGT — Friendly, family-run #Italian #restaurant nestled on banks of the #CuyahogaRiver in the emerging Rivergate District.https://t.co/oCmhLyR07X

Very interesting talking to #BuckeyeTrail Assoc board member about how @hikethebt is supporting more thru-hikers on the #trail.

Did you know #Ohio has longest trail within any state?

I learned a lot of great information about #hiking #trails & #bike trails at the #Cleveland #RTCOpeningDay!#IHeartTrails!!

Happy Opening Day for Trails! We’re broadcasting the celebration on social media all day—and we’d love to give you and your trail the spotlight! So let us know how you’re celebrating by tagging us and using #RTCopeningDay! pic.twitter.com/Xt2jwdUj1n

In honor of #RTCOpeningDay AND #NationalPoetryMonth, there’s going to be a trailside poetry reading in #Cleveland’s Hart Crane Park in just a few minutes! If you’re at the Cleveland Opening Day celebration, come join us. #Ohio pic.twitter.com/dpIbg3KeAB

In case you're in need of a pep-talk, YES, warm weather will return to Cleveland's waterfront! #CuyahigaRiver pic.twitter.com/MzRBGPsgcM

We're betting not many @railstotrails Opening Day for Trails events were upstaged by a towering #freighter as it passed by on its way to #LakeErie #RTCOpeningDay #CuyahogaRiver #SamLaud pic.twitter.com/FQiTv5TUaD

LIVE: The Rock & Roll Hall of Fame is hosting its Celebration Day. Check out the newly updated Hall of Fame exhibit with us! https://t.co/PIJthblAht pic.twitter.com/piBpG73PSt

Thanks for celebrating #RTCOpeningDay yesterday! We had such an great time kicking off the spring trail season with you that we couldn't fit all the fun into just one day—so we'll be spotlighting a few more celebrations!

Stay tuned for more and to learn if you won trail gear! pic.twitter.com/gVRCuGNd4T

@ClevelandRows I now see that the thank you tweet that I wanted to tag you in did not have the "@" that would have tagged you correctly.

So thanks again for hosting the great @RailsToTrails Cleveland event: https://t.co/tefVULNhjb

We were pleased to participate in Opening Day for Trails on Saturday. #RTCOpeningDay https://t.co/ccyuCC8ce7

Now we're getting excited about the biennial @GC_Trails conference, coming up on May 31. Registration is open. https://t.co/uT4z3SSGxy

Give your feedback here: https://t.co/M4MyNKZ1gX

Thank you @RailsToTrails Midwest Regional Office for emailing me the PDF of the Industrial Heartland Trails Coalition #IHeartTrails brochure.

Great plans for #bike #trails that I learned about at the #Cleveland #RTCOpeningDay event at @ClevelandRows.https://t.co/SjOXsHfJFf pic.twitter.com/99iVUAA9Mb

I look forward to learning more about the work of Rails-to-Trails Conservancy (@RailsToTrails) work in expanding trails, and hearing updates from their Cleveland trail and environmental protection partners, at the next Opening Day for Trails (#RTCOpeningDay) in Spring 2019.

On Friday, April 6, 2018, and Saturday, April 7, 2018, I attended four events for which I wanted to thank the organizers and sponsors in a blog post. Here are links to each of the other three blog posts: