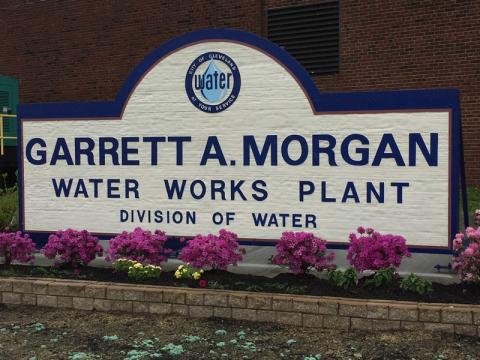 On the morning of Saturday, May 12, 2018, I woke up knowing that I would be attending my wife, Julie's, concert in the evening, but I had a strong sense that I had forgotten a daytime event that I had wanted to attend. There is always something going on that you can learn about by following the right organziations on Twitter. Luckily, I was reminded by a 7:24 a.m. "What's it gonna be for you today?" tweet by @ShareTheRiver. The tweet linked to the Share The River event post: Cleveland Water Tour of the Garrett A. Morgan Water Treatment Plant

In celebration of Drinking Water Week, Cleveland Water will be holding an open house from 10 a.m. to 4 p.m. on Saturday, May 12, at the Garrett A. Morgan Water Treatment Plant.

Join us for an opportunity to learn how your water goes from lake to tap with a free guided tour. We’ll also have family-friendly activities, hands-on demonstrations and exhibits, food trucks, games, and giveaways.

Registration is encouraged for tours, which are approximately 30 minutes long. Please note that the last tour leaves at 3 p.m. The Morgan Plant, like all of our water treatment plants, is a 365/24/7 operation. Some areas may be very noisy. Certain restrictions will be in place for your and our employees’ safety.

Tours also involve considerable walking and standing. If you have any accessibility needs, please let us know in advance, and we will make accommodations as we want all of our guests to be able to participate.

Initially started more than 35 years ago by the American Water Works Association (AWWA), National Drinking Water Week is an annual event for both water professionals and customers to unite in recognizing the vital role water plays in our daily lives.

One of the main reasons I am grateful for seeing @ShareTheRiver's tweet reminding me to attend Cleveland Water's open house is that I am very interested in the subject of water treatment and city resource infrastructure. In fact, I have already written two blog posts about the subject:

Here is a map that shows the physical relationship between the Garrett A. Morgan Water Treatment Plant and both the Southerly Wastewater Treatment Plant and Akron Water Reclamation Facility.Since all the water from the Cuyahoga River ends up in the source of our drinking water -- Lake Erie -- you can understand how important the work of these three water treatment plants are to the health and wellbeing of our region.

Facts about Cleveland Water and Garrett A. Morgan

During the tour, I learned that Cleveland Water's Garrett A. Morgan Water Treatment Plant is one of four treatment plants that provide safe, quality drinking water 24/7/365. 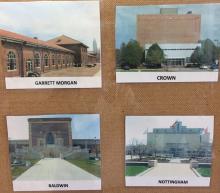 In the past, redundant systems were not in place to guarantee that if one plant was down, the others could make up for the loss. Now, there are more efficient pump systems, generators available during power outages, and backup water pumps within the Garrett A. Morgan Water Treatment Plant. Between the backup systems within each plant, and the combined resources of the four plants, Cleveland Water has in place systems and plans to ensure there will always be water available.

Today, over 1.3 million people are served by Cleveland Water. It was interesting to learn that when the Garrett A. Morgan Water Treatment Plant was first built, the only treatment was to chlorinate the water, and the water intake was close to the Cuyahoga River, which was polluted from all the industry along the river in Akron and Cleveland. Today, Cleveland Water does more than just purify the water, and the water intake is farther out in the lake. 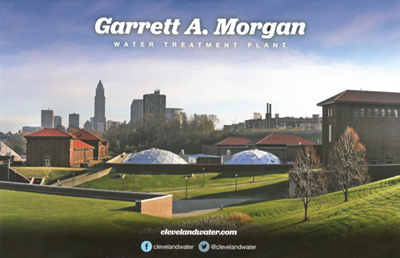 I have always wanted to see the Garrett A. Morgan Water Treatment Plant up close, since driving by on the shoreway, I was fascinated by the architecture of these old buildings. During the tour, I learned that while the main building was built in 1916, the building I was looking at from the freeway was the newer water pump station (I believe it was built in 2005). Cleveland Water did a good job matching the architecture of the new pump building to that of the older, historic building.

The Garrett A. Morgan Water Treatment Plant, built in 1916, was originally named The Division Avenue Pumping and Filtration Plant, and was constructed on the site of where the original water system originated in 1856. This makes Morgan the oldest treatment facility within the Cleveland Water system. In addition to being the oldest, Morgan also has the largest Ohio EPA approved capacity of 150 million gallons, pumping an average of 60 million gallons of water a day to the residents and businesses located downtown and in the western and southern suburbs of Cleveland.

In 1991, the plant was renamed the Garrett A. Morgan Water Treatment Plant. It is named after Garrett Augustus Morgan, a local inventor and entrepreneur whose creations have made a positive impact on the world and are still being used today. He is also known for inventing an improved traffic signal with a warning light; a zig-zag stitching attachment for sewing machines; and hair cream. However, his most notable invention was the gas mask which saved the lives of several men trapped during an explosion in an underground tunnel beneath Lake Erie in 1916. This same gas mask was adopted by the U.S. Armed Forces during WWI and became the prototype for modern day firefighting hoods used to battle oil well fires.

Before going on the tour, Department of Public Utilities Manager of Communications Paula D. Morrison told me some details about the Garrett A. Morgan Water Treatment Plant and how they have a mini-museum about Garrett A. Morgan. 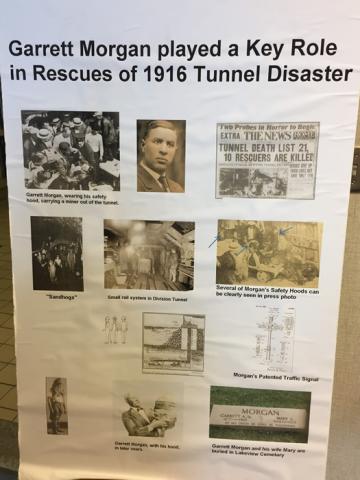 I have read a little about Garrett A. Morgan at the Western Reserve Historical Society (@CleStartsHere) (see photo in #GarrettMorgan tweets), and have a poster of him in my office that Lee Hall (@PaleeoGuy) designed for the 2017 March for Science in Cleveland (@ScienceMarchCLE). (See photo in my office in #ScienceMarchCLE tweet and all the posters in my March For Science Cleveland on Earth Day 2017 blog post.)

See the "September 9, 2015 - Gateway District "Take a Hike" Tour" section of my "Take a Hike," Cleveland! - 2015 & 2016 blog post to learn how I "met" Cleveland inventor Garrett Morgan (or at least a talented actor who shared his stories) during the tour. The Historic Gateway Neighborhood Corporation (@GatewayCLE) "Take a Hike" Cleveland tours are the greatest!

I think it is great the Cleveland Water honored Garrett A. Morgan during the tour -- see my photos in the tweets below.

Here are my @sos_jr tweets and retweets, which include information about Cleveland Water and some photos of the Garrett A. Morgan Water Treatment Plant. Note that photography was restricted during the Plant tour, so some of the photos are from Cleveland Water's website. Please share informational tweets and any photos and videos that you find interesting by retweeting.

What's it gonna be for you today? @canalwaycle's #RiverSweep or @ClevelandWater's Garrett A. Morgan Water Plant Tour - how 'bout both?! https://t.co/jE4VCwEA1t

2) @ClevelandWater's open House and tour of their Garrett A. Morgan treatment plant: https://t.co/uF32UCQZ75

#DrinkingWaterWeek may be winding down but we've saved our best event for last! Join us at our Open House tomorrow from 10 to 4 and see first-hand how your water goes from #LakeErie to your tap. Details: https://t.co/Wp452Uts9J pic.twitter.com/xNI2N2GZm3

Our #DrinkingWaterWeek Open House is live! Follow along for open house highlights or better yet, stop by and learn how we get water from lake to your tap! pic.twitter.com/zcPqGQwGtM

I am going on tour since @ShareTheRiver reminded me via tweet: https://t.co/kkDh5pw0Ll

I learn that 250 million gallons cleaned each day at 4 #Cleveland #water plants. pic.twitter.com/7BA9q07Z3J

I always thought the @ClevelandWaterÕs #GarrettMorgan #Water Treatment Plant was a cool looking #historic building. Learn it was built in 1916.

In the control room I learn how redundant pump systems better than 20 years ago.#DrinkingWaterWeek. https://t.co/YwAayV0kFi pic.twitter.com/JK5l5mhbhn

I love the brick & tile roof of the @ClevelandWaterÕs #GarrettMorgan #Water Treatment Plant.

Our guests are learning the water treatment process and asking lots of interesting questions! #DrinkingWaterWeek pic.twitter.com/FB318kj42q

Thanks everybody for your questions! If you want to know more, come to our #DrinkingWaterWeek Open House this Saturday! Register for a treatment plant tour here: https://t.co/odjvu9Kpkm pic.twitter.com/Cx8yR21PRb

I learned today that 9/15 is next @WallyWaterdrop @neorsd open house.

I think we have a Chemist in the making! pic.twitter.com/pSqazKhnwt

@neorsd having fun at the other side of the urban water cycle. Stop by and see us at the @ClevelandWater Open House. Open until 4pm at the Garrett A. Morgan Water Plant on West 45th Street in Cleveland! pic.twitter.com/quVjR5u9Vj

World tour? No. World CLASS tour? THAT we can do. Saturday, September 15: https://t.co/jaCxmo7rRT #CleanWaterFest https://t.co/oViPCrDAnI

Thank you @ShareTheRiver for letting me know about this #Cleveland event via your tweets and blog post! https://t.co/DaFpgr9UKn pic.twitter.com/jKDklFHOyA

Thank you everyone for coming out to our #DrinkingWaterWeek open house today! We hope you enjoyed it! pic.twitter.com/etcaTJUoAo

Glad you enjoyed it! Thanks for stopping by!

Thanks @MainStStark for sharing my blog post about visiting @WallyWaterdrop a few years ago at the @neorsd Open House, and many of my retweets. https://t.co/rNj6mUYs7C

Didn't make it to the open house a few weeks ago? Get the abridged version thanks to 3 informational boards we've installed along the Lakefront Bikeway overlook near W. 45th and the Morgan Treatment Plant. pic.twitter.com/ebAVZ97tNQ

I enjoyed the tour @ClevelandWater and called your communications office today to get more information. Thanks. https://t.co/F9AY3l7VwHhttps://t.co/lCPQifn2nP

Thank you, Cleveland Water, for the informative tour. I hope to learn even more in the future.