"Eight Days a Week" of Fun

A flurry of activity! In late April and early May of 2018, I had eight busy days of activities! I originally created this as one single blog post listing all nine events, but later decided to publish nine posts to make it easier to find for my website visitors to read.

I still think of it as one post that I hope will not only give you insight into my eight-day week, but more importantly, encourage you to support these organizations with your presence at future events. 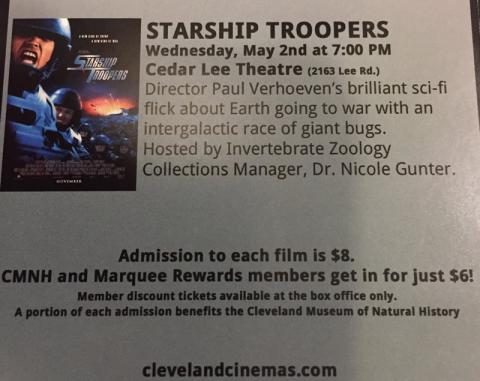 My wife and great co-blogger, Julie, and I enjoy attending the Starship Troopers, the Reel Science event featured a science talk by the Cleveland Museum of Natural History (@goCMNH) collections manager of invertebrate zoology, Dr. Nicole Gunter (@LepanusLady - @CMNHentomology). This was the last of the 2017-2018 Reel Science series. The Museum's adult programs coordinator, Ashley Hall (@LadyNaturalist), is already gathering ideas for next year's films -- send her your recommendations!

They came to our planet, they destroyed our cities, but on May 2, they'll learn they messed with the wrong species! See #StarshipTroopers #REELscience-style @CedarLeeTheatre! Intro & post-film Q&A with @CMNHentomology Collections Manager Dr. Nicole Gunter. https://t.co/HjMEFJacJ3 pic.twitter.com/hyqPMPzYWw

I'm so happy I get to host #StarshipTroopers for our @GoCMNH #ReelScience program with @LadyNaturalist. Clearly there is no better way to learn about #invertebrates than through a hypothetical discussion on #space #bugs! #outreach #scicomm #Entomology https://t.co/Y2hTgchUY9

Looking at my calendar & I have something every night this week!

and much more on weekend!! pic.twitter.com/JmN7sBAOXc

My last one of the season tonight! https://t.co/qgEkSerZOD

We had a blast tonight at #REELScience: Starship Troopers @CedarLeeTheatre, hosted by #entomologist Dr. Nicole Gunter @LepanusLady! We even brought a really "BIG bug" with us, #Bathynomus giganteus: a deep sea isopod! #scicomm #CLE pic.twitter.com/PEDIX9EQ9o

P.S I love this thing as if it were my own child. It's currently in my house in a giant tupperware.

A great specimen to get a discussion going.We need all the #scicom as we can get! !!!