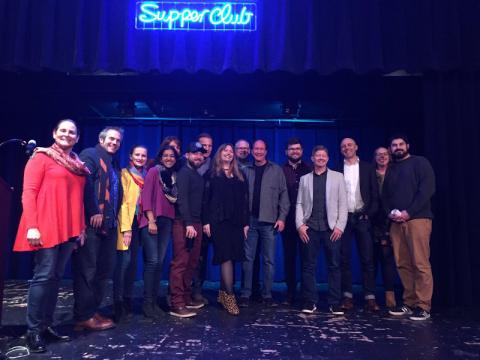 What follows are photos and video shared via my @sos_jr tweets and retweets. They don't begin to fully capture what these creatives presented, so I encourage you to do a Google search on all of them to learn more. You should plan on attending future events with friends with whom you want to share the experience that is PechaKucha Night Cleveland!

I just saw that #PechaKucha Night #Cleveland @PKNCLE - Volume 36 at @MusicBoxCLE is on February 20th. https://t.co/U5cb2PwAmG

I have my ticket! You can get your ticket here https://t.co/suJYOX5BB5

Thursday 2/20 I'm talking about the #RestoomsofCleveland for @PKNCLE taking place at Music Box. If you've never been to one of these events, it's like a TED talk that's more of a fun party. pic.twitter.com/DJsQjrAD6Y

On Thursday February 20th, @clevelandcyclewerks Scott Colosimo will be sharing a bit about his love for motorcycles and the future of motorcycle design and manufacturing! Tix at https://t.co/qag9eAjGYr pic.twitter.com/3P7OTPhhj6

Next Thursday @PKNCLE Volume 36, photographer @stephentomasko will take to the @MusicBoxSC stage to present his perspective on the community that takes over the muni lot each @Browns home game! Free tix https://t.co/qag9eAjGYr pic.twitter.com/oq7xKGe1EB

This Thursday, Feb 20th, Matt Ashton will take to the @PKNCLE stage at @musicboxcle for Volume 36 to talk about the global impact of coffee! Free tix available at https://t.co/qag9eAjGYr pic.twitter.com/XbY8wswMWg

Just finished helping the @PKNCLE team curate the presentation line up for #PKNCLEv36 and it is AWESOME. Join us this Thursday 02/20 at @musicboxcle for an inspiring evening! Get your free tickets while they are still available at https://t.co/Bo3K7dcb9O. #ipk2020 pic.twitter.com/wY0zLnBcC7

This Thursday I'll be giving a little presentation on how I made my way through the illustrations for Rust Belt Arcana by @LakeErieFlyFish WARNING... strange imagery will be presented... https://t.co/aT3gyRGpKU

Just checked out the presenter order (which is different from the pic below), and let me just say that I might need a nap beforehand. #oldmanproblems.

Still, tho, I can't wait! This is going to be great! pic.twitter.com/aPSFahXWdn

Join me tonight at @PKNCLE as I give a talk about @CLEKurentovanje ! Get your free tix at https://t.co/1NZ5xCg82r See you there! pic.twitter.com/pWc9AmZSfQ

Tonight, @DownpourStudio will be at @musicboxcle as one of the presenters of @PKNCLE - Volume 36. Topic = the process of illustrating Rust Belt Arcana.

So excited to share more about the #restroomsofcleveland I go on first! https://t.co/g3TV4SxnJ6

On this first International PechaKucha Day, I think it would be helpful to know what PechaKucha is about:

PechaKucha (Japanese for "chit chat") is the world's fastest-growing storytelling platform, used by millions around the globe.

PechaKucha is what "Show and Tell" always dreamed of becoming.

PechaKucha is the ideal tool to share passions and drop some knowledge.

Global innovators use the PechaKucha platform to create powerful, visually-compelling stories that move audiences in less than 7 minutes.

PechaKucha began because, well, because people talk too much!

In 2003, yearning for "More show. Less tell" architects Astrid Klein and Mark Dytham of Tokyo's Klein Dytham architecture invented PechaKucha. The initial purpose: to streamline long design presentations. Sessions soon morphed into happenings: PechaKucha Nights -- first in Tokyo, then around the world. Today, more than 50,000 people present at 1,100+ global PechaKucha Nights every year. And the number keeps exploding. Today schools and business use PechaKucha to creatively and effectively engage students and employees on a range of subject matters.

Great chance to bring this fun and effective presentation format to your school, office or community!! Join us!

Check out the rest of the event times for #ipk2020 and even catch some presentations! https://t.co/GK0Wzkful2

Weâ€™re still celebrating #ipk2020 over here in #Detroit Fun fact: Did you know that @PechaKucha gains 10 new cities every month and has over 1,200 cities to-date!?

Cleveland at the Tokyo Creative Games

This summer from August 15th - August 22nd, between the Olympics and the Paralympics in Tokyo, Japan, the world will bear witness to the "Creative Games"! This eight-day celebration of creativity is going to feature speakers from around the world; all utilizing the PechaKucha Night (PKN) format. If we can raise the funds requested, we will be sending someone from Cleveland to Present at the Creative Games in Tokyo and represent the Cleveland creative community on a global stage!

Our 100% volunteer group has been hosting PKN here in Cleveland for over ten years. Since day one it has been purposefully free because we see this event as an important opportunity to bring people together and NEVER want a ticket price to be the barrier to a connection.

Having watched over ten years of presentations from Cleveland PKN presenters, we can tell you that the world could benefit from a little more of the passion that drives Cleveland forward. Our creative community deserves to be represented on the world stage and we hope you'll consider helping us make this happen.

After making a donation, you can also nominate the perfect person to represent the creative Cleveland community on the GLOBAL stage at the Creative Games.

Also #Cleveland has been asked to a BIG international PechaKucha event.

A Note of Thanks from PechaKucha Night Cleveland

I appreciate being acknowledged!

Thanks for your dedication to our event @sos_jr!

Here are the 10 presenters of the evening. They each talked for 20 seconds on each of their 20 slides:

I really appreciated that after Arabella Proffer (@VendettaBella) made her "Restrooms Of Cleveland" presentation, she made a point to find me during the break to introduce herself. As is often the case today with social media, we followed each other, but had not met in person.

She let me know of her work with Pandata (@OHpandata), since she knew of my interest in them. I had written a blog post about their great work developing a new interactive visualization system with the Cleveland Museum of Art (read blog post here). I have also written about being invited by Pandata the to attend the OHTec 2019 Annual Cleveland Best of Tech Awards (read blog post here.)

Thank you so much, and please, do contribute to the hashtag wherever you find yourself in Cleveland

My stupid bathroom is finally 95% done. It was green and stanky beige, with awful tile from 1969. No longer! #RestroomsofCleveland pic.twitter.com/GZ1mjqxwyq

Thanks to everyone who came out and supported my weird project. I invite you all to please contribute to #restroomsofcleveland here + on Instagram. You can get the book at Loganberry, Salty Not Sweet, Visible Voice, Macs Backs, the library and https://t.co/doLOGbxDsd pic.twitter.com/PCJb0y3Qks

David Biro shares his thoughts on the creation of large scale art installations with the #PKNCLE36 crowd. pic.twitter.com/g1QWPh1Jd0

I know Nicole, since we both work on the Cleveland GiveCamp Steering Committee. It was great to learn about her work to create Cleveland Kurentovanje as a great new cultural event.

Sounds like a fun time!! It is happening this week in #Cleveland. #ThisIsCLE https://t.co/UeGe8QzIC1 #PKNCLEv36 #IPK2020 pic.twitter.com/vMlT9xI7Ej

This year's 7 day long @CLEKurentovanje is in full swing! Thank you to @LauraDeMarcoCle for this great article featuring yours truly about all the fun stuff we have going on this year! https://t.co/D4W8sV7qz2

Matt Ashton on the global impact of coffee!

Matt Ashton on the global impact of coffee! Look for: â€œDirect Tradeâ€

Matt Ashton of @SolsticeCoffee reminds us that baristas are really coffee bartenders and we should pay more attention to direct trade coffee #PKNCLE36 pic.twitter.com/IowwfM1wqR

I was asked to take a photo of the presenters and organizers during the break.

Talking about depression and suicide in a family member.

Hear about research being done by @UHhospitals for depression and suicide.

Loree Vick shares her personal story about not wasting the pain and working to advocate for mental health awareness. #PKNCLE36 pic.twitter.com/q1cVGMj5xz

#Cleveland Cycle Werksâ€™ Scott Colosimo sharing his love for #motorcycles and the future of motorcycle design and manufacturing!

#Cleveland Cycle Werksâ€™ Scott Colosimo sharing his love for #motorcycles and the future of motorcycle design and manufacturing!

They are bringing the work to #Cleveland!

Scott Colosimo of Cleveland Cyclewerks talks about finding his passion in design and the auto industry. He helps literally move souls. #PKNCLE36 pic.twitter.com/Wtz0xsaY3L

The evening ended with a talk by Dan Moulthrop, which was very moving to me, about how we need to work to keep our democracy. He also shared information about the work of The City Club, of which he is the Chief Executive Officer. Over the years, I have written many blog posts about The City Club which you can read here.

We need to work for democracy!#Vote!
Read the constitution!#Census is important!

We need to work for democracy!

â€œWe donâ€™t get to keep democracy just because we like it. We have to work at it,â€ says @danmoulthrop of @TheCityClub at #PKNCLE36 pic.twitter.com/VOJpjRzOLy

Register to vote, VOTE!, participate in #Census2020, reach out to your reps, help elect good candidate, run for office!, support local journalism, examine your biases, listen. We can all help democracy thrive!

(And yes, @SAJansky, we promise the gong will return to @TheCityClub!) pic.twitter.com/RBaIShfaD2

Thanks to all the presenters for a fabulous evening on #ipk2020!!!

Thanks to all our #PKNCLE36 presenters for a fabulous evening on #ipk2020! pic.twitter.com/uwZsMAtWpF

I'm energized by the excitement that is PechaKucha Night Cleveland

Having SUCH A GREAT time talking to old and new friends after @PKNCLE â€” this is a must attend #ThisIsCLE event.

It is late on a Thursday night (I only see 3 cars still here), but Iâ€™m energized by the excitement that is @PKNCLE! pic.twitter.com/xbpVo8hhDN

Like last year, when PechaKucha Night Cleveland (@PKNCLE) was also at the Music Box Supper Club (@MusicBoxCLE), I took time after the event to look around the Cleveland Flats to see where they were setting up for Brite Winter 2020 (@Britewinter - #Brite2020). Learn more in my Brite Winter blog posts from 2014 to present.

After @PKNCLE it is great to see the tents and lights ready for the big @Britewinter #Brite2020 #Cleveland party this Saturday in the Flats. https://t.co/fwzRJwGFxF@Britewinter is always a great time! https://t.co/PqDggqfClE pic.twitter.com/GHOCmwjjmX

When you attend @Britewinter this Saturday, be sure to check out the @CleveMetroparksâ€™ â€œ@CleveFoundation Centennial Trail Lake Linkâ€ â€”

Great to be down in the #Cleveland Flats after @PKNCLE at @MusicBoxCLE. #ThisIsCLE

Wishing all the best to all the good people sharing in the Twitterverse. pic.twitter.com/GTw8Kg4eTb

Thrilled to be here tonight with @PKNCLE. Great crowd! pic.twitter.com/XA86g4mg7r

Thatâ€™s awesome. Wish I was there!

The Muni is crazed!

Wish you were here too @LakeErieFlyFish - when is your next visit to #theLand? Found a great way to collaborate with @DownpourStudio for GreatLakeErieEducatorsExchange2020 #awareness is the holy grail of nature/outdoor education

Do you like living in a democracy? If so, we need to work to keep it!!

The day after PechaKucha Night Cleveland, we are still tweeting about the importance of democracy.

Do you like living in a democracy? If so, we need to work to keep it!!

Definitely, #Census #Journalism and research the facts, and I recommend book #HowtoReadtheConstitutionandWhy https://t.co/sxsucZRE8O

Feeling inspired after this weekâ€™s convos on the importance helping our democracy thrive. Thanks @danmoulthrop for sharing this message with the @PKNCLE crowd and thanks to #CLEvotes for organizing a great event on creative ways to get out the #Census2020 and the vote. pic.twitter.com/1eCrFnV1p1

I have now written fourteen blog posts about the great PechaKucha events (click here to view) in Cleveland (@PKNCLE) and also in Akron (@PKAkron).

If you are interested in learning more about PechaKucha Night Cleveland, please see these nine blog posts:

I really appreciate the PechaKucha Night Cleveland leadership team, presenters, and sponsors, and want to thank them for all these great events.