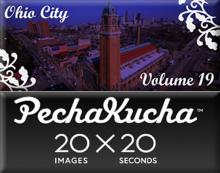 Heading over to PechaKucha, we saw Market Garden Brewery's "Before I Die, I Want To..." wall. We were familiar with the "Before I Die" global art project (BeforeIDie.cc - @BeforeIDieWall) and had heard there was a Cleveland wall, but had never seen it. Somehow, it was a perfect fit with spirit of the night, since PechaKucha Night Cleveland presenters often share their life passions. Market Garden Brewery was one of the sponsors, and provided beverages for the PechaKucha Night Cleveland Volume 19 event. 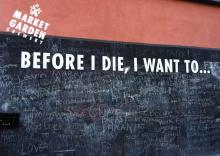 Here are links to the presenters to help you learn more about them. We added direct links to the PechaKucha Volume 19 presentations that are on YouTube, but recommend you also see more on the YouTube PechaKucha Night Channel. Please also see the tweets below with additional information.

Thanks to the organizers, we can share with you a video that gives you an overview of the evening:

Here are our photos of the evening:

Save The Date - October 4th! The next PechaKucha Night Cleveland will be at the Cleveland Museum of Art's atrium. Please mark your calendar and share this announcement.

If you have never been to the Cleveland Museum of Art's atrium -- go! We have a 360 degree view of the atrium on our Chalkfest blog post here.

Here is a list of some of the sponsors that, along with the PechaKucha Night Cleveland leadership team, made this successful evening possible:

Thank you, sponsors! We really appreciate your support of this great Cleveland event!

Here are all the tweets/retweets from Stuart about the PechaKucha Night Cleveland event:

#PKNECLE19 - THIS FRIDAY - rain or shine! Behind the West Side Market on West 24th or in Great Lakes Tasting Room! pic.twitter.com/7mlhu8qjBv

@ridgej sorry missed connecting at @PechaKuchaClev tonight. See you at next event.

Thx @TransformerStat for the retweet. I enjoyed learning more about art at @PechaKuchaClev talk. https://t.co/Coa7ZHFRZP

@mchristoff and @PechaKuchaClev, Maybe show social/web address of presenter before/after their presentation? It's about #CLE connectivity!

@ridgej gr8 idea! I would also like to have social media/website information in advance on the @PechaKuchaClev website. cc: @mchristoff

.@wallywaterdrop Haha! I knew that when I tweeted at @PechaKuchaClev abt how gr8 #Cleveland water is, that I would get a retweet from U. Thx

Here are all the tweets we found with the Twitter hashtag of #PKNCLE19:

Stopping in at office for an hour before heading to City of Cleveland special events committee meeting for #PKNCLE19 http://t.co/VnoYqANcWT

Lunch at flying fig then one more look at the #PKNCLE19 (@ Flying Fig) http://t.co/KUE6ePZMLe

There's over 500 people behind West Side Market for #pkncle19 with more streamin in! Always a great event by @mchristoff + team!

Drawing the boundaries of emptiness #PKNCLE19

#PKNCLE19 Batman could be interesting....

11 freakin felony convictions. I like a guy who says busy #PKNCLE19

Sex is power and she knows it #PKNCLE19

People come to our store not to see us, not to see books, but to taste the sweet succulent Twinkie cream. #PKNCLE19

Anyone make it to @PechaKuchaClev? Its a great event. Thinkers and doers explain ideas with 20 images / 20 seconds per image. #PKNCLE19

Thanks to everyone that came to #PKNCLE19 last night! Great evening of amazing presentations and great 550+ audience pic.twitter.com/NLa1uBvMqQ

Despite my Vines not posting I had a great time @PechaKuchaClev #PKNCLE19 & @rust_belt_chic magazine launch party last night. Keep it up! 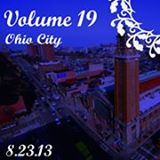 Be sure to follow/like/link to PechaKucha Night Cleveland at: