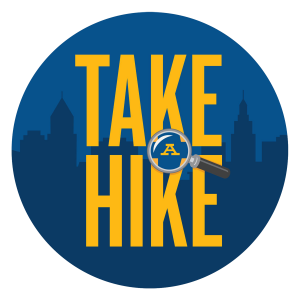 We had not planned on writing a blog post about Heritage Tourism Take a Hike Tours, but we had such a great time that we wanted to let others know about these tours.

Stuart had learned about the free "Take a Hike" tour via Playhouse Square's website, but had thought it was going to be similar to great backstage tours we had done at Playhouse Square in the past on our own and with the Ohio Blogging Association (read our blog post about tour here). We had planed on doing this Playhouse Square District tour all summer, but with our busy schedules, we never both had a free Tuesday night.

We were happily surprised, once on the tour, to learn that this weekly summer tour of Playhouse Square District was part of a group of Cleveland tours that take place all over our city! We had heard of these Cleveland history tours -- which include visits from famous local historical figures played by actors -- a few years ago, and now were pleased to finally attend.

A big thank-you to Cuyahoga Arts & Culture for not only sponsoring these free tours, but for reaching out to us via Twitter with the correct information about all the tours. We highly recommend that you you follow @CuyArtsC on Twitter. Stuart also uses their monthly e-newsletter (sign-up here) to find great ideas for things to do each month (watch for our next blog post for more information).

We recommend you read the Heritage Tourism Take a Hike Tours web page, which Cuyahoga Arts & Culture recommended to us, for descriptions of all five of the tours. You can also learn about Private Group Tours on this site. Since Canalway Partners (@CanalwayCLE) is one of the sponsors, we also found information on their Take A Hike information web page.

Here is the description from the Heritage Tourism Take a Hike Tours web page of the tour we did:

PlayhouseSquare Tour
Every Tuesday at 6 PM: Meet in the State Theatre Lobby (1519 Euclid Avenue).
Known for being the second largest performing arts center in the country, PlayhouseSquare boasts even more than incredible theatres. Learn about the past grandeur of Euclid Avenue, renowned department stores, such as Halle’s, Bonwit Teller and Sterling Linder, important social clubs, such as The Union Club, Star Plaza and the historic Statler Hotel. Visitors may enjoy special guest appearances by deejay Alan Freed or “Mr. First Nighter” Milton Krantz. Convenient parking is available across from the Hanna Theatre on East 14th Street or along Euclid Avenue near PlayhouseSquare’s theatres.

We hope to attend more of these hikes -- they are worth making time to attend! Here are our @sos_jr tweets with photos and a Vine video of what we saw during our tour. Because of the new way Twitter displays multiple photos, it is best to click on each one to view it fully.

Every Tues through 9/16 FREE tour of @PlayhouseSquare. 2night my wife & I found a Tue where we R both open http://t.co/ZyJ6uA9PGF #ThisIsCLE

I recommend being a #Cleveland tourist & take this FREE tour by @DowntownCLE. Gr8! http://t.co/ZyJ6uA9PGF #ThisIsCLE pic.twitter.com/xnmJ0mwDmJ

Enjoying District after tour of @PlayhouseSquare District. (at @DistrictCle in Cleveland, OH) http://t.co/eoknYQMC26

.@DistrictCle I expected the @PlayhouseSquare District tour by @DowntownCLE to good but instead it was great. I highly recommend. #ThisIsCLE

@sos_jr @DowntownCLE You can see the schedule of Take a Hike tours here! http://t.co/qvExrd0Aou They offer five free tours every week.

.@CuyArtsC thx!!! I was VERY impressed by @PlayhouseSquare Tour! Gr8 to see there are 4 more in #Cleveland http://t.co/kWOlGDuTZ5 #ThisIsCLE

Told others about the #Cleveland "Heritage Tourism Take a Hike Tours" http://t.co/XMxInaQNQ5 Thx @CuyArtsC for the link to correct website.

@sos_jr Love the blog post and glad you had fun on the @GatewayCLE Take a Hike tours of downtown! Here's the post: http://t.co/UrA50lIiXt

Thank you Cuyahoga Arts & Culture (‏@CuyArtsC) for your kind comment and letting me know the Twitter name for the Historic Gateway Neighborhood Corporation. I have followed @GatewayCLE today, and will recommend that other peole also follow.