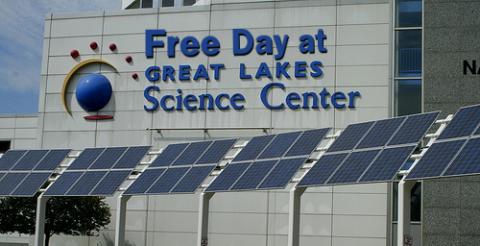 Weekends and weekdays -- we have found that there is so much going on in Cleveland! We want to share with you here two events that we attended February 21 and 22, 2014.

The first event, attended by Julie and Stuart, PechaKucha Cleveland (@PKNCLE), was something we have enjoyed many times in the past. Knowing the history of the location, The City Club (@TheCityClub), added an interesting dimension.

The second event, attended by Julie, Kevin, and Stuart, was a gift to the community from the The Cleveland Foundation (@CleveFoundation) as part of their 100th birthday celebration -- a free day at the Great Lakes Science Center (@GLScienceCtr).

We were originally planning to publish this as one blog post about both events, but have now decided to wait until Monday to post the Cleveland Foundation section for two reasons. First, and most importantly, the Cleveland Foundation is scheduled to make a big announcement about their next big event on Monday. Secondly, as we pulled together the content, we discovered that there was so much to share that it warranted two posts.

Here is the SECOND installment which includes the Cleveland Foundation announcement... 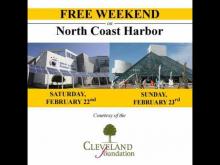 We have been to the Great Lakes Science Center (@GLScienceCtr) for other events. What we saw on Saturday, February 22, 2014, as part of the gift from Cleveland Foundation, was much more than we saw in the past. At many of the presentations, the museum staff asked for a show of hands of how many were visiting for the first time. Based on what we saw, the Cleveland Foundation and Great Lakes Science Center reached their goal of connecting to many first-time visitors. Over 16,000 science center guests attended the free event. If they had as good a time as we did, we assume that they will come back for future events. Before we write about our day, it is important to say why we were at the Great Lakes Science Center that day. Of more importance than the fun we had this one day is the important role that The Cleveland Foundation (@CleveFoundation) has been playing in our community for 100 years.

Cleveland is unique in the world in having the first community foundation. The Cleveland Foundation has assets of $2 billion and distributed $89 million in grants in 2013. The February 22 & 23, 2014, free weekend on North Coast Harbor -- Saturday, Great Lakes Science Center and Sunday, Rock & Roll Hall of Fame & Museum -- is just one of many events planned to commemorate this special year. See below in the "future" section of this blog post about the next big event.

See the special ClevelandFoundation100.org "The Cleve1and FOundatiOn -- Leading a Century of Change" website to learn more about "The Foundation Effect" on Cleveland through the decades.

We have never had we seen the Great Lakes Science Center (@GLScienceCtr) the way we did that day. When we arrived, a little after the opening time, we were shocked to see a line in front of the building that went the length of the building along the sidewalks, and was at least six people across. It looked like one long snake of humanity. Here is the official Cleveland Foundation video that shows the excitement of the crowd.

Our experience was completely different from those that entered through the front door. We pulled into the attached parking garage, and entered the building with no lines and plenty of staff to help visitors start to explore. The Great Lakes Science Center and Cleveland Foundation had many staff and volunteers in special blue shirts ready and willing to assist attendees -- everything was very well organized. The upper floors were crowded, but the science center had opened sections that we had never seen before. We had no problem getting seats at the special presentations we had chosen to attend.

Please read through our tweets and see the photos that follow to get a sense of what we did during the day. We only want to bring special note to the three following items: There is so much more we can write about the day, but we will let the photos and tweets speak for themselves. Here is the schedule from the special free day at the Great Lakes Science Center.

Here are our photos. If you device does not support a Flickr slideshow, please view February 22, 2014 - Great Lakes Science Center Free Day online.

Thank you to Great Lakes Science Center for allowing us to share their The Cleveland Foundation - Free Weekend on North Coast Harbor Facebook photos here:

Here are Stuart's @sos_jr tweets and retweets from the day. We think they give a good overview of the day. We also recommend that you follow not only @CleveFoundation but also their #TCF100 hash tag to learn about all that is happening during this 100-year anniversary of the foundation.

Tune in to @WKYC at 5, 6 and 7 pm for details on upcoming free weekend on @NCoastHarbor, thanks to @CleveFoundation! http://t.co/zd6f4Da8Wn

@endunham we will be at @CleveFoundation event at @GLScienceCtr today. I hope to see you there. It has been too long since we have talked.

Gr8 to know!! -> RT @NASAglenn: Our monthly tours schedule has been posted @NASAglenn. We'd love to have you come. http://t.co/RZuc4KTkG9

Take a selfie during today's free day @GLScienceCtr and tag us! @CleveFoundation #TCF100.

@CleveFoundation Thank You for making Cleveland's two cultural treasures available to our hard-working families this week-end.

@inthecircle truly thank you for tonight and all the fun programs we enjoy year round.

Congrats @GLScienceCtr & @CleveFoundation: Great attendance for #TCF100 free day! Thanks to all who joined us at @NASAglenn VC.

Day 2 of #CLE weekend on @NCoastHarbor gets you into @rock_hall for FREE! Enjoy special programming today http://t.co/E3OY7Uqjbk #TCF100

.@CleveFoundation my son was just telling me the gr8 time he had at the @rock_hall today. He also saw show at @GLScienceCtr. Thx for #TCF100

See the Cleveland Foundation Day at Downtown Festivals is the March AND June centennial gifts to the community article, and follow on Twitter @CleveFoundation and hashtag #TCF100 for more details! 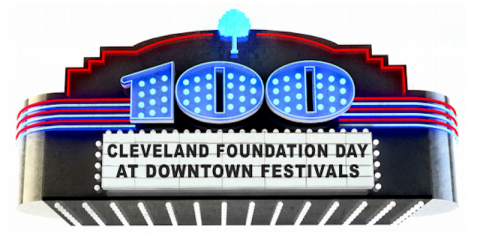 In 2013, the Great Lakes Science Center began a series of adult evening events called Science After Dark. Check it out! We have learned that NASA Glenn Research Center is offering tours of their facility.

Gr8 to know!! -> RT @NASAglenn: Our monthly tours schedule has been posted @NASAglenn. We'd love to have you come. http://t.co/RZuc4KTkG9

Learn more in past posts...

If you want to learn more about these organizations events we have attended in the past, please see our blog posts: