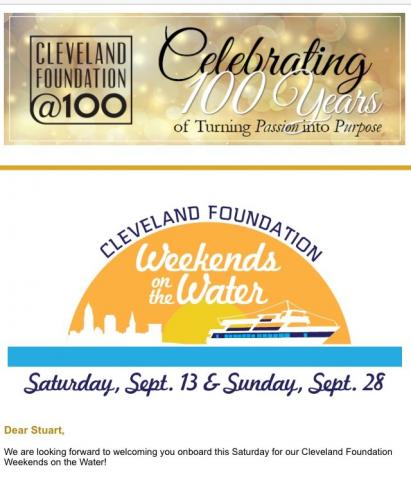 Thank you, Cleveland Foundation, for your September 13 & 28, 2014 Centennial Gift: Weekends on the Water!

We are very fortunate to have been among the 6,000 Clevelanders who received free tickets to an educational cruise on Cleveland's largest excursion ship, the Goodtime III. On Saturday, September 13th, we joined a joyful crowd on the docks at the end of East 9th Street near Voinovich Park. A light rain did not dampen the spirits of those waiting to board the ship. We were entertained on the dock by the Cleveland Coast Guard (@USCGGreatLakes), who demonstrated their water cannon.

Once on board the Goodtime III (@GoodtimeIII), we had great views of the lake and river from the comfortable lower level. The narration for the cruise was all about the Cleveland Foundation's (@CleveFoundation) role in supporting local recreational and environmental organizations that are reclaiming our river and lakefront for public use. Here is the description from the Cleveland Foundation website (NOTE: we added links to the gift partners, and encourage you to learn more on their websites):

For the Cleveland Foundation Weekends on the Water, the foundation is joining forces with several partners to make the event a unique learning tour for families. A special cruise narration will highlight some of the recent exciting development along the river and lakefront. Also, representatives from the foundation’s September gift partners – Cleveland Metroparks, the city of Cleveland’s Office of Sustainability, The Nature Conservancy and Northeast Ohio Regional Sewer District – will be on board during the cruises to answer questions and to provide educational materials on topics such as local water quality and conservation efforts.

What we learned from the cruise naration expanded on much of we learned recently from the Historic Gateway Neighborhood Corporation's (@GatewayCLE) Canal Basin Park in the Flats "Take A Hike" Tour and visits to local parks. Rather than repeat all that we learned here, we invite you to read our tweets/retweets below and our September 11, 2014, "Take a Hike" - Cleveland's Flats & Beyond! blog post via these links:

The only thing we wanted to add beyond what we wrote in our "Take a Hike" - Cleveland's Flats & Beyond! blog post is about the Northeast Ohio Regional Sewer District (@WallyWaterdrop @neorsd). We had planned to write about the sewer district's huge plant near the Cleveland Metroparks CanalWay Center (@CleveMetroparks) which is just out of sight of where Stuart biked on Sunday, August 24, 2014, but cut it from the story. (We felt that talking about sewage did not fit in a blog post about parks.) In hindsight, cutting it was a mistake.

While preparing this blog post, Stuart received a direct message on Twitter from @WallyWaterdrop with the current version of the Northeast Ohio Regional Sewer District (@neorsd) logo for their #CleanWater2015 program. The logo will be formally presented at the upcoming NEORSD Open House, where their new 2015 clean water initiative will be announced. 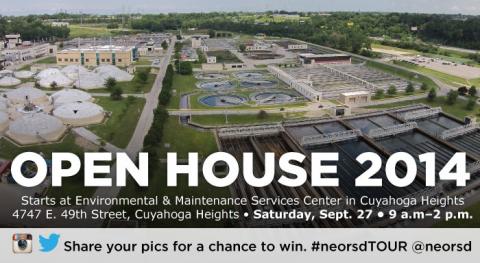 Enjoy our photos and videos from the day.

Please see photos and useful links in our @sos_jr tweets/retweets.

We're #hiring a Writer/Editor to join our #Marketing & Communications team in #CLE. Learn more about this #career: http://t.co/Pi7vEXF8NL

@sos_jr @CleveFoundation @clevemetroparks Hear, hear to this! The Lake Link Trail is going to be amazing.

.@neorsd thx for retweet. I just talked to ppl from your office who R here on #TCF100 cruise http://t.co/somOVqLJSk pic.twitter.com/1azIhuiiPM

.@wallywaterdrop it was gr8 to shake your hand & meet @neorsd staff at @CleveFoundation #TCF100 tour of lake/river. pic.twitter.com/RPRrN70JSH

.@GLScienceCtr sorry to C your closed today. Would have stopped in for early lunch after @CleveFoundation's gr8 event pic.twitter.com/kqeeUtUuLZ

Our first Weekends on the Water @GOODTIMEIII educational tour is returning to port! #tcf100 pic.twitter.com/26b3yQ7ahc

@SaraShookman Yes- Both days sold out in 45 mins. Tremendous interest.

Cleveland sure is beautiful this rainy morning on our first free Weekend on the Water tour! pic.twitter.com/ywUqK5BLi5

Thx @CleveFoundation! We wrote in blog post how fortunate we are to have #TCF100 FREE tix on @GOODTIMEIII http://t.co/uL956GYzgb #ThisIsCLE

CUYAHOGA: If you're 1 of 6000 enjoying @CleveFoundation Water Wknds, here's why the Crooked River burns on. http://t.co/aDt5beCU7A #tcf100

Clevelanders on board @GOODTIMEIII for our Sept. gift - Weekends on the Water learning about Lake Erie & Cuy. River. pic.twitter.com/6Sk7Kg38lX

CAREERS: Looking for a career you love? Consider our #neorsdTOUR 9/27 for a closer look. http://t.co/0Ho5uT8eI2 pic.twitter.com/MyicLW9B4h

If you missed the Centennial Gift: Weekends on the Water event, please note: