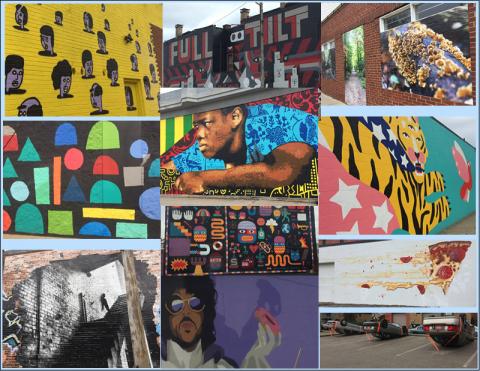 Two months before the Creative Fusion Spectacular, on Saturday, September 17, 2016, my wife, Julie, and I attended an art event of The Cleveland Foundation's Creative Fusion program (@CleveFoundation). There we saw three new Cleveland murals being created as we watched, near Transformer Station (@TransformerStat) in Hingetown (@hingetown).

In our blog post entitled A Weekend of Community Art, Including the 2016 Cleveland Museum of Art Chalk Festival, we shared our photos and video of the murals being created. 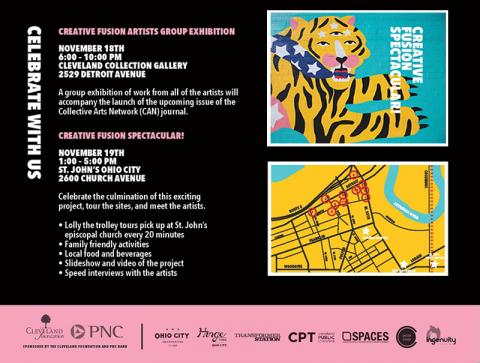 Then, when I heard that The Cleveland Foundation had arranged with Ohio City Incorporated (@OhioCityTweets) to have their Creative Fusion Spectacular on Saturday, November 19, 2016, I knew I wanted to attend to take a special tour of the finished neighborhood murals, and see the temporary Creative Fusion Gallery at 2529 Detroit Avenue, Cleveland. 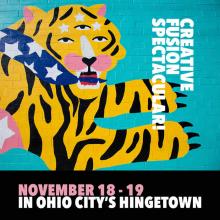 I really enjoyed the tour, and decided to put this blog post together as my way of thanking the organizers, and encouraging others to take the tour.

Take Your Own Tour!

If you missed this special Creative Fusion Spectacular day, you are in luck. You can still do your own tour of the public murals using the map in the PDF booklet. A BIG thank-you to Economic Development and Property Manager Ashley Shaw (@AshleyShaw) for emailing me the Creative Fusion Spectacular program booklet PDF that includes not only the map, but also great information about the artists.

My wife/co-blogger, Julie, couldn't attend the Creative Fusion Spectacular due to a MusiGals choir concert, so I hope to use this map to take her on a Cleveland mural tour soon.

I recommend viewing these photos and video in full screen mode, and then going to the actual murals and taking your own photos. If you share them online, please let me know so I can take a look! Be sure to watch the video, which shows the largest mural in the state of Ohio.

Here are my 58 @sos_jr tweets and retweets related to the Creative Fusion Spectacular -- please share any photos and videos that you find interesting by retweeting!

Join us Nov. 18 & 19 to learn more about #CreativeFusionCLE artists behind the new @hingetown murals: https://t.co/ID4QcNQLuL! pic.twitter.com/qyF8fB3EeK

The dust bunnies can wait! pic.twitter.com/hucuy1a4gk

Join us in celebrating the Creative Fusion Cohort! There will be a gallery show 11/18 & a celebration event 11/19. https://t.co/OSrQnMNLEP pic.twitter.com/6MSrd1TrV7

Talk about Spectacular! Thanks to @AshleyShaw and #CreativeFusion Michela Picchi for spreading the word about today's fun @hingetown from1-5 pic.twitter.com/D5d81nK303

Loved seeing the progress of this #CreativeFusionCLE mural over the last week coming into work https://t.co/ow2wa7Pcjv

It may be cold & blustery, but bundle-up and head out to Hingetown to check-out the murals. So worth it. https://t.co/LCrdBMh1O1

Museum staff show me pics of how flipped cars pic.twitter.com/WcKjp2iW7l

Took a trolley tour of all the new murals in our neighborhood. Thanks to @CleveFoundation for putting on this event. #creativefusion

This is all one mural, now the longest mural in the state of Ohio. #creativefusion @CleveFoundation pic.twitter.com/gnDhGwl3WY

All of these are within a few blocks of our place. It's been so great to watch our neighborhood transform. #creativefusion @CleveFoundation pic.twitter.com/0FpzkoWtXQ

NEW BLOG POST: Taking it to the Streets with #CreativeFusionCLE https://t.co/Y7e2NuLSoa

Learn more about Rainer's installation this evening. Join us for tea, talk and tapas! https://t.co/mHhnid4Qm7 pic.twitter.com/MmBaqsQCAt

An artist and kids at Lakeview Terrace housing complex are transforming a wall in Ohio City. @cptclehttps://t.co/VVsRZ81bMZ pic.twitter.com/fzi2DmecNJ

'Kings and queens' of Lakeview Terrace reflected on mural wall that for decades has divided residents from Ohio City https://t.co/lE19w9luHH

'Kings and queens' of Lakeview Terrace reflected on mural wall that has divided residents from Ohio City https://t.co/eJuhfH4d9J

My babies would probably like this, they all love art #PositiveScenerayInCleveland https://t.co/ZiBY7UFujx

As I was finishing this blog post, I decided to include the following official description of the Hingetown Creative Fusion Public Art project, since it does an excellent job of giving background information about the project and its hosts/artists.

What's this Creative Fusion thing all about?

By the end of 2016, the Hingetown area in Cleveland’s Ohio City neighborhood will be home to several public-scale visual art pieces, a legacy of a unique collaboration of international and local artists who are spending the next three months living and working together through the Cleveland Foundation’s Creative Fusion program.

Launched in 2008, Creative Fusion is an international artist residency program that has brought more than 70 artists from around the world to Cleveland. This year, the program is evolving to pair a local artist with a visiting international artist at each of the host arts and culture organizations.

The Fall 2016 cohort has been dubbed the Street Art Edition, and has been formed around the theme of public, street-scale art in a concentrated geographic area. The public artworks, which will include photographic and painted murals and structural sculptures, will be centered along the Detroit Avenue Corridor in Ohio City, along sites chosen to maximize the overall impact for the neighborhood.

Who are the hosts and the artists?

Six organizations will host an international artist and at least one local artist:

Here are some articles and other related online resources about the Creative Fusion Spectacular.

If you have not already done so, please read my A Weekend of Community Art, Including the 2016 Cleveland Museum of Art Chalk Festival blog post.

You can also see my other art-related blog posts, plus blog posts about The Cleveland Foundation-sponsored activities that I have attended.