Since we have enjoyed Brite Winter for several years now, we are posting our @sos_jr tweets and photos/videos as our way to thank and congratulate the organizers of this unique outdoor winter event in Cleveland. 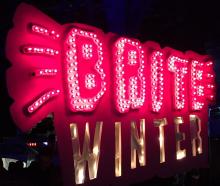 Here is the official mission and vision statement of Cleveland Brite Winter:

To embrace the Cleveland winter by celebrating with light, fire, art, music, games, and snow.

Our vision is to contribute to the Cleveland cultural landscape with a free/low cost, and accessible event in the winter time; an event where anyone can experience winter through traditional and innovative activities. Brite Winter marries fire, participatory art, food, music, and games to build community while helping us embrace the cold winter months.

Fitting into the rest of the Cleveland calendar, we see Brite Winter as the premier Cleveland event between New Year’s Eve and St. Patrick’s Day and a showcase for Northeastern Ohio’s artists, musicians, and creative culture. 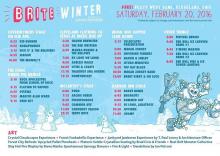 Congratulations to the Brite Winter (@Britewinter) leadership on their seventh successful year! We agree that it was a good idea to bring the event back to the Cleveland flats.

It was an unusual year. Mother nature did not deliver the normal sub-freezing temperatures that we have come to expect. (See the "14° in 2014" outdoor fun in our 2014 blog post.) The warm weather brought out lots of people! It was really great to see so many people having fun outside in the middle of Cleveland's winter!

If you attended Brite Winter's #Brite16, please be sure to give the leadership feedback and thank them by filling out the post-event survey. You could win a $50 gift certificate to Music Box Supper Club (@MusicBoxCLE) or a Brite Winter hat.

We also suggest that you read a write-up by Case Western Reserve University's The Observer (@CWRU @CWRUobserver) entitled, Brite Winter celebrates unusual Cleveland winter warmth. It provides a lot of details of the musical performances at the event.

Here is the official "Thank You, Cleveland" video from Brite Winter, followed by our photos, and tweets/retweets. Enjoy the visuals from this great winter outdoor spectacular!

Please share any photos and videos from our @sos_jr tweets and retweets that you find interesting by retweeting. Thank you for sharing the fun.

.@LauraDeMarcoCle Good news about @Britewinter. We remember the first year we attended was near what is now @CleveMetroparks Merwin's Wharf.

Have you heard the news? We're moving Brite to the Flats! Here are the details - http://t.co/zRLNHxnAaT pic.twitter.com/N7dTriE0Ir

We love the event happening on February 20th! #Brite16 https://t.co/eLGAwqKdXJ

Winter is here (even though it doesn't feel like it!) Find out more about #Brite16 & our new location in the Flats. https://t.co/JeExxU49xn

Check out the #Brite16 artist and band poster. Hope to see you on February 20th! pic.twitter.com/rcxKxaj9Jv

#Brite16 is getting closer! Are you ready? pic.twitter.com/roOS7aHtDL

Thanks to our Fire Pit Presenters @GCRTA @Compassstorage @medmutual for keeping us warm and cozy throughout #Brite16 pic.twitter.com/FlaVSMn64D

Get to know the #Brite16 layout before the big day & arrive on time, ready to rock out with @GCRTA. pic.twitter.com/xmzqZzzVR9

We've updated the #Brite16 Music Schedule for your viewing pleasure. Check it out! https://t.co/hLSc2BqhmU pic.twitter.com/BDq4wKp6hx

The @BriteWinter Fest Returns to the Flats Bigger and Better https://t.co/Tfb0cOikSE

We'll be on @cleveland19news tomorrow morning, 7-8am, being featured for @Britewinter! Tune in!

.@MusicBoxCLE With the free tickets you gave me and @PKNCLE and @Britewinter, I might be at your location three times this week. Fun times!

Check out the finalized and well laid out schedule for this Saturday's @Britewinter fest. We go on at 7 @musicboxcle https://t.co/8tbTAXQO1B

Less than 48 hours away from #Brite16. The transformation is already beginning on the West Bank of the Flats. pic.twitter.com/J2rZkATmVE

Snag a picture like this with Fluri on Saturday. Make sure to tag the picture with #Brite16! pic.twitter.com/SUdLI3aZ3n

Navigate through #brite16 tomorrow with our live Twitter coverage. We'll let you know when and where bands are playing.

Who would have thought that @Britewinter would get nicer weather than us this year? Like this post if you plan on going out and supporting!

Things we like: bike rides, 50 degree Feb. weekends, free music festivals. May have to combine all 3 & take a ride to @britewinter tomorrow

So, @Britewinter & @NCoastHarbor's #CLEicefest are happening this weekend and of course the weather will be sunny with temps in the 50s...

Our life-sized #ThisisCLE letters will be hanging out in the Flats this weekend at @Britewinter! #Brite16 pic.twitter.com/gF7vFCRLaH

#FF! @Britewinter for info about all of tomorrow's bands, and @InTheCLE - I am tweeting for them next week!

Big weekend coming up and weather will be a big factor. Executive director, @brianhorsburgh… https://t.co/xq6V2bFEyx

Get your picture with Fluri today & make sure you tag #Brite16. Thanks to @randycriderart, the guy behind Fluri! pic.twitter.com/0QGdt86CHi

#Cleveland #weather in February? How can it be 68°?? pic.twitter.com/XiLMb9ntDz

Enjoying what you’re hearing? We’d love to hear from you! Use #brite16 to share your favorites.

Only in CLE do we have concerts next to aggregate silos #Brite16 #NoFilter pic.twitter.com/vBKMHSaiFQ

Was planning on just heading home but @sos_jr's excitings pics and @NeedYourDisease being there has me convinced. See you at #Brite16! :D

@JarrydHuntley @sos_jr If you come down, we are on the second floor of Music Box (Improv). Have fun.

One #ice wall refuses to fall to #fire in #Cleveland at @Britewinter's #Brite16 https://t.co/SJBuywzDH4#ThisIsCLE pic.twitter.com/pcNgI2WFBx

@sos_jr @CoverMyMeds @CuyArtsC @Britewinter @216Bot What a great night for it! I have my windows open on February 20th!

Listening to Ohio Sky play at #brite16. In all my years I have heard few bands tighter that… https://t.co/rxO0OxcjOy

So this is what I'm doing tonight. #rbmc #mural #brite16 #cleveland #rustbeltmonster pic.twitter.com/8zxCivorVI

On the bubble about heading down to @Britewinter? Get out the door now! @Themowglis take the stage @10! #Brite16 pic.twitter.com/5Tks1vJbiY

.@wkycweather pretty crazy how last year on this day it was -17. That's an 84 degree swing!

Quite a difference from Feb. 20 last year when it was -17 degrees! #Brite16 pic.twitter.com/aYVyidG15R

A big thank you to all of the bands on both of our stages as well as @Britewinter! Hope everyone is having fun! pic.twitter.com/zFJYKz9KEy

Thanks to @brianhorsburgh and the @Britewinter staff for a great event. We need to get #Cleveland to embrace winter as part of who we are.

.@JarrydHuntley Great that U attended @Britewinter & had a gr8 time. Sorry we didn't connect to talk.

Tonight was surreal. I can't believe I live in this city with these people.️ #Brite16

Yesterday at @britewinter was special thx Cleveland! Thx to the fest staff + volunteers for putting on a great fest. pic.twitter.com/b8sUo1VYTx

How was your #Brite16 experience? Please take a moment to complete our survey! https://t.co/4rZhsYHUPa pic.twitter.com/xwT8FZ0FSK

@sos_jr No worries thanks for spreading the word! Had a great time! I'll hopefully see you soon! @Britewinter @NeedYourDisease @musicboxcle

Thank you all who attended @Britewinter and to the awesome bands that performed! pic.twitter.com/fVqMIYD07u

A few photos from @Britewinter! Thank you to all who came out! pic.twitter.com/eWZzpNcLPZ

Has it really been a week since #Brite16? To everyone who helped make @Britewinter one for the record books, thanks! https://t.co/ckNSxEFf0C

2016 was the fifth Brite Winter we have attended. Our first one was on February 2, 2011, at Cleveland's Hart Crane Memorial Park, next to what is now the Cleveland Metroparks' Merwin's Wharf (@CleveMetroparks).

(On a related topic, while writing this blog post, we found an interesting article, published on October 15, 2015, about this area. The article, "Hart Crane In Cleveland," was from Cleveland Belt Magazine (@Belt_Magazine).  You can also learn more about the area in our 2014 blog post about "Lunch By The River" at Merwin's Wharf.)

Learn more about Brite Winter in our past blog posts: