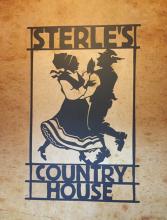 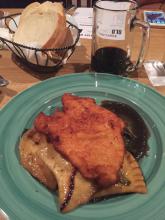 First, let's talk about the food.

We both ordered the chicken schnitzel. Julie had decided to get the schnitzel even before arriving, since it brings back great family memories of European food!

The schnitzel was served with a side of pierogies, braised greens, and onion gravy -- Stuart is not known for liking "greens," but he really enjoyed these. Stuart also enjoyed the Bona Black Bavarian beer. See some of the photos shared in the tweets and in other attendees' blog posts that we list below.

The Sterle's Country House restaurant was open Tuesday night just for the Ohio Blogging Association members, and one other party -- a special experience. On Tuesdays and Wednesdays, they normally close at 2:30 pm. They have later hours Thursday through Sunday. (See hours at: SterlesCountryHouse.com)

Here is the history of Sterle's Country House from their website, which explains why they serve this traditional European food:

In 1954, Frank Sterle, an immigrant from Ljubljana, Slovenia, founded his Slovenian Country House with a small building on East 55th Street, a few picnic tables, and only one waitress — who had to memorize the small menu since none had been printed, featuring traditional fare including wiener schnitzel, chicken paprikash, stuffed cabbage, sausage and sauerkraut.

After Frank’s death in 1986, the restaurant was taken over by Mike Longo and Margot Glinski, both immigrants — from Italy and Germany, respectively. Under their ownership, Sterles remained a success. After 25 years and the Mike’s passing, Margot entered into retirement to spend some well deserved time with her grandchildren.

In 2012, Rick Semersky purchased Sterles to keep alive that Cleveland landmark, one of the many examples of what makes Cleveland, Cleveland.

It continues to uphold the history and traditions that make Sterles great while ensuring it longevity for another 60 years. With a modern take on schnitzel, great bands and a large selection of craft brews, Sterle’s continues to be the landmark that it is while also becoming a favorite for a new generation of Clevelanders.

While we enjoyed the food, and the old-world ambience of the restaurant, the main reason we attended was to interact with fellow Cleveland Bloggers! If you are a blogger, we highly recommend you attend future Ohio Blogging Association events and follow OBA on Twitter at: @OHBlogging 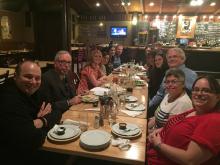 In addition to the normal small talk of social dinner, this Ohio Blogging Association dinner had special advantages. We learned from fellow bloggers about the topics they focus their writting on, and discussed ways to improve our blogs.

As aptly stated by the Ohio Blogging Association leader, Alicia Hansen (@AliciaMHansen), close friendships have developed within this group. New attendees are made to feel welcome, and returning members are celebrated.

Here is the list of attendees. We added the Twitter names and blog names for those that we knew. Learn more about them by reading their blogs and following them on Twitter:

As we were writing this blog post, Alicia Hansen sent us an email letting know that there will be a special Ohio Blogging Association gathering in December 2015. "Like" the Facebook.com/OHBlogging page for further details. (Be sure you turn on Facebook notifications for this page.)

Dinner in the Dark 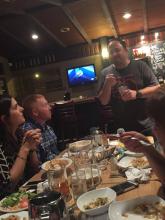 Being around creative people leads to learning about creative things.

After the dinner, we were joined by Sterle's Country House's Executive Chef Jeff Jarrett (@ChefjjJarrett). In addition to giving us some insight into the restaurant, he shared some information about Cleveland Dinner in the Dark (@DinnerintheDark).

A few of the bloggers were already aware of "Cleveland’s latest foodie fascination." We had not heard about this, so we decided to share here how Cleveland area charities benefit from the work of local chefs:

Dinner in the Dark, Cleveland’s latest foodie fascination, brings together six different chefs each month, cooking together, often for the first time, at a different restaurant.

Dinner in the Dark, behind co-creators Brian Okin and Jeff Jarrett, brings together Cleveland’s chefs and food lovers to share their passion and compassion. Once a month we host a six course dinner created by six local chefs. The participating chefs and the menu for the evening is not revealed until the guests arrive, keeping them ‘in the dark’.

An impromptu dinner designed to stimulate your palate and surprise your taste buds by offering you no idea of what you will eat or drink or who will be cooking for you. Imagine allowing yourself to let go of your inhibitions and enjoy great food and wine from some of Cleveland’s best chefs, by allowing them to indulge in their most inner creativeness and challenge your senses.

Each course is complemented by a carefully selected wine or artisan cocktail.

It is always interesting to learn about ways in which creative people use their talent to benefit others -- the best of Cleveland's tradition of volunteerism.

What Others Have to Say

Here are what other bloggers wrote about this tasty and fun evening:

Here are Stuart's @sos_jr tweets and retweets about the @OHBlogging dinner at Sterle's Country House. Please share the photos and information by retweeting those tweets that interest you.

Note how some people who did not attend were able to participate in the joy of the event remotely -- the power of Twitter social media.

#Ohio #Blogging Association is planning their next gathering of #Cleveland #bloggers. Follow @OHBlogging to watch for updates.

Join us on Tuesday the 20th at Sterles Country House! http://t.co/OZsR3DHnwl

Join us at Sterles Country House this Tuesday night! RSVP via this Facebook page... http://t.co/2s6f7TNB15

I'm going @OHBlogging's #Cleveland #Bloggers dinner at @SterlesCLE. If U #blog in #CLE, U should go to future events https://t.co/PB56oQn7JH

Enjoying this Cleveland icon @SterlesCLE with a new spin on old world entrees by this guy Chef Jeff Jarrett. pic.twitter.com/AeNPNzLv1p

Super excited to be hanging with @OHBlogging at @sterlescle tonight

A wonderful meal at @sterlescle with the #Cleveland #OHBlogging crew. My stuffed cabbage hit the… https://t.co/pOnQ5z2Bhz

Two thumbs up for the schnitzel and pierogi at @SterlesCLE!

@chefjjjarrett is without a doubt one of the hardest-working, most generous, and most gracious chefs in the CLE!

@aliciamhansen @SterlesCLE the traditions & joys & memories of that special place on e55/Bonna - & the soup, yoy the soup - love

@joecimperman I believe it -- @SterlesCLE is a very special place for many!

Thx @SterlesCLE for an enjoyable and tasty meal with @OHBlogging. It is appreciated that you opened tonight for us. pic.twitter.com/i2d4lcaaog

.@WhyCLE Oh, I look forward to reading your post about the @OHBlogging event at @SterlesCLE. I see U have yummy pics https://t.co/Wrh4Lox7Kq

If @joecimperman says it's ok, then it must be true ! #numberedstreets my friend. Hope to see u again soon. https://t.co/CkagFcQk6b

We have attended many official and informal events with Ohio Blogging Association members. It is a great group to be associated with to learn about what is happening in our community. Here are our blog posts about some of the official events that we attended: