Told CLE: "A STORY HEARD IS A STORY TOLD"

When we learned that the April Ohio Blogging Association (@OHBlogging) event would involve storytelling, we were intrigued. Told CLE (@ToldCLE) is a participatory storytelling organization. We looked forward to attending this special Cleveland bloggers event led by Told CLE founder, Dave Sabol (@Dave_Sabol), on Wednesday, April 15, 2015.

Here is the description of the event:

As bloggers, we're natural storytellers. Our April OBA event will challenge you to take your stories off the blog page and into the realm of live storytelling as we partner with Told (www.toldstories.com).

First, enjoy dinner and some liquid courage (at your expense) at Deagan's, who are graciously hosting us for the evening. Then stay for an evening of stories and getting to know your fellow bloggers in a new way.

The theme for the evening will be “I said that?” Stories of verbal blunders, Freudian slips, unintended brilliance, and everything in between are game, as is whatever interpretation you can come up with.

All audience members are welcome (but not required) to prepare a story on the theme and put their names in the bucket for a chance to tell their tales. Stories should be under 6 minutes, true, and have yourself as the central character. Run through your story for a friend, a pet, or a Told staff member for extra practice. Check out our page on storytelling advice for more: www.toldstories.com/how-to-tell-your-story.

Stuart remembered previously having a great time at Deagan’s Kitchen and Bar (@DeagansKitchen) for a Tweetup, so it was fun to be back for another social media event with fellow Cleveland bloggers. Deagan's staff were great! The private room was a great meeting space, and the staff was very responsive to our needs. (If you have never been to a Tweetup, they are great! See our blog posts about a few of the Tweetups we have attended.) 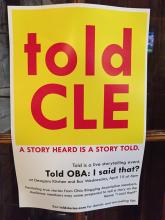 A few of the attendees came prepared to speak, but others were motivated to get up and share stories spontaneously after hearing the earlier speakers. Here is the format as outlined on the ToldStories.com website:

HOW TO TELL YOUR STORY

At each Told event, audience members will have a chance to tell their story live on stage. Come prepared to tell a 6 minute story (max) that connects in some way to the show theme. You can be creative with how loose that connection is—just don’t forget about it completely.

Prior to the start of the show, you will be able to toss your name into the bucket if you’re ready to go. In between the night’s two featured storytellers, we will pick audience members at random from the bucket. You may not be called, but we still love you.

Before coming to the event, practice up. Your story must be real, and it must be your story. Also, time can slip away from you in front of our audience. 6 minutes is both a lot of time and not much at all.

If you would like some reassurance or feedback about your story, email us at toldcleveland@gmail.com. We would love to help you bring your tale to light.

Ohio Blogging Association members's stories were varied and entertaining. After hearing Kristian Campana from OhioFestivals.net (@OhioFestivals) tell a story of international miscommunication, Stuart decided to tell a story of his American classmate's experience when they both were studying in Bath, England. Ask Stuart sometime about the importance of knowing that the word "pissed" means something entirely different in the United States than it does in England.

After the storytelling, we talked to Dave Sabol (@Dave_Sabol) to learn more about Told CLE (@ToldCLE). We learned that other cities have storytelling programs, and that he wanted to have Told CLE grow and engage more people. We also learned that you can also listen to some of the past Told CLE stories on their website. 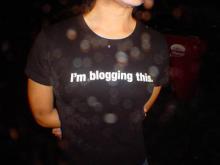 One of the greatest things about an Ohio Blogging Association (@OHBlogging) meeting is meeting other bloggers from the Cleveland area. Here is the list of who attended, with links to their blogs. We recommend learning more about them by reading their blogs and following them on Twitter:

We would like to send out a special thank-you to Jen Rome for organizing this fun event.

Here are some tweets and retweets related to this event.

Tonight's the night for our April #CLE Blogger Meetup with @toldCLE! If you're joining us at Deagan's Kitchen &... http://t.co/7oBpZeV6Zs

And I just snorted. Stories are that good at #ToldOBA.

Thanks to @OHBlogging for having Told at their mettup tonight. So many great stories told! #toldOBA

What a great event with Told tonight! Thanks to all who came out, particularly those who shared stories. And... http://t.co/Ap8QtL8Qa2

http://t.co/jxtrcWVG2U will soon have festival schedules for all of Ohio's neighbors. That's a lot of funnel cakes!

#CLE, our next blogger meet up takes place this Sunday the 26th at 1PM at XHIBITION. They're providing a special... http://t.co/HrsnaUWAlC

MT @OHBlogging #CLE, our next blogger meet up takes place this Sunday the 26th at 1PM at @XHIBITION_: http://t.co/PVBljfykT5

new #blog post: the Ohio Blogging Association teamed up with @toldCLE for a very fun evening filled with... http://t.co/sBiFdqgK6s 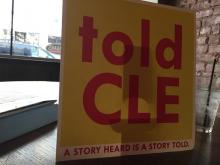 At the Cleveland bloggers' Told event, we learned that the next Told CLE on June 18, CORRECTION: NEW DATE FOR #Told9 IS: June 10,  2015, will be in partnership with Thrive Cleveland (@ThriveCLE). We had talked to some people from Thrive Cleveland recently (see our Brite Winter blog post), so we are excited to learn about this collaboration. Watch for details on: ToldStories.com