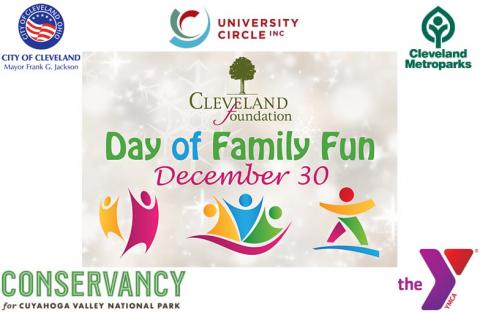 After attending six of the Cleveland Foundation's (@CleveFoundation) centennial events in 2014 (see the full list in the "Centennial Gift Blog Posts" section of this blog post), Stuart was disappointed that he would not be available on December 30th for the final event due to work commitments.

Then, unexpectedly, he was given two extra days off from work! This allowed him, on December 29th, to enjoy a day of hiking on the Buckeye Trail (@HikeTheBT) in the Cleveland Metroparks (@CleveMetroparks) and Cuyahoga Valley National Park. On December 30th, he was able to return to both parks and University Circle (@InTheCircle) for Cleveland Foundation's Family Fun Day.

What follows is information about this final centennial event, and our photos/tweets of our activities of the day. Before we share our experiences from this one day, we want to share with you, the reader, Cleveland Foundation's "Enduring Trust" video. Understanding the worldwide importance of the first community foundation is more important than our thank-you message for one day of family fun.

2014 was a great year of celebration for the Cleveland Foundation with many great events. However, let's take a moment the recognize that the grand experiment of a community foundation, that has flourished for 100 years, got its start right here in Cleveland.

Please learn more by watching this @ideastream 30-minute documentary and viewing the related materials found on the Enduring Trust: The History & Aspirations of The Cleveland Foundation web page.

On a personal note, Stuart was pleased to see his professor of Cleveland Nonprofit History, David C. Hammack, in the video. Stuart took Dr. Hammack's class at Case Western Reserve University's (@CWRU) Mandel Center for Nonprofit Organizations. The class kicked off the inaugural year of the center's new Masters of Nonprofit Organizations (MNO) degree program. (Previously, starting in 1984, the Mandel Center only offered a nonprofit management certificate. At that time, Cleveland was fortunate to have one of only two centers in the country devoted to training nonprofit leaders.) The MNO degree is still offered at CWRU, but the nonprofit center has been closed.

The following is the official Cleveland Foundation Family Fun Day announcement followed by our @sos_jr tweets and retweets about the event before it began on December 30th. We include them here, so you will know of all the planned activities beyond what we had time to attend. 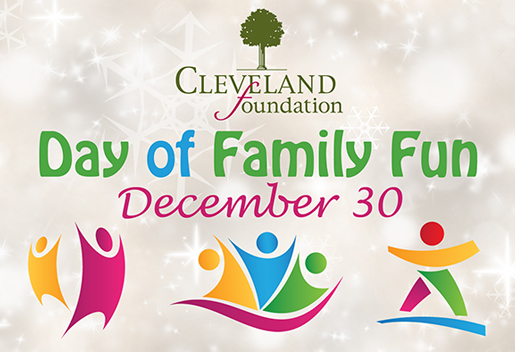 
CLEVELAND – The Cleveland Foundation’s December – and final – centennial gift to the community involves 5 gift partners – with free activities at 38 separate sites across 6 counties in Northeast Ohio! The activities start as early as 5:30 a.m. and end as late as 11 p.m. No tickets are required at any of the sites, but each site has specific details to help visitors plan their visit on Dec. 30:

Free admission and special programs at all local branches of the YMCA of Greater Cleveland – 5:30 a.m. to 10 p.m. (Downtown branch closes at 9 p.m.)

We hope thousands of Northeast Ohioans will take advantage of this month’s gift – with the largest number of gift partners and largest geographic reach of any of our centennial gifts this year!

.@CleveFoundation I hope there is a December gift to finish fun year celebrating your 100 years of serving the community. Announcement date?

Exciting news! Tomorrow we will announce the final community gift of our centennial year. Any guesses? #TCF100 #CLE

FREE skating on the Rink at Wade Oval and more Day of Family Fun activities courtesy of @clevefoundation http://t.co/duFrG7lube

Now have off from work on 12/30, so I can attend @CleveFoundation's #TCF100 Day of Family Fun! http://t.co/cY8iNWUYLf pic.twitter.com/5aRnGxo8Sq

NEW BLOG POST: Day of Family Fun: Dec. 30 - In case you missed it, our December centennial gift to the community i... http://t.co/zPVc9Ybcq7

The Cleveland Foundation has lots lined up for Family Day of Fun. http://t.co/Xn5HFoZNpt

#CLE continues to have a great year! We just set a centennial-year grantmaking record of $95 million: http://t.co/fsu2SFCXMh #TCF100

A renaissance in the making, but there's so much more to do in #Cleveland:(opinion) http://t.co/h8mCvrJV5G

@CleveFoundation Thank you so much for blessing NEOhio with so many incredible gifts this year! #PayItForward #CommunityPride

Please read our @sos_jr tweets/retweets and view our photos to learn about how we spent the day at these December 30th Cleveland Foundation (@CleveFoundation) centennial events, and about the follow-up information.

We hope you enjoy our slideshow of photos and videos from our day at three locations of family fun!

Another unexpected day off today. Like yesterday, I plan spend time outdoors at @CleveMetroparks & @ConservancyCVNP. pic.twitter.com/x5JItpXyYT

@wkyc visited our downtown branch this morning to get the scoop on the @CleveFoundation Day of Family Fun! http://t.co/xbTPL8KbUr

Today is the day! Get the full schedule of activities for our December centennial gift to #CLE: http://t.co/vzhWy9lWwx #TCF100

Come out and play during a Day of Family Fun TODAY! The Cleveland Foundation's December – and final –... http://t.co/BNgOG28jCS

Heading out to the Rink @inthecircle for skating from @CleveFoundation? Stop by for $2 off admission - includes 2 rides on the #CLEcarousel!

Ranger Josh about to take the first group out on a @ConservancyCVNP nature hike! #TCF100 pic.twitter.com/1V8P0P2nJI

Already busy at the Rink at Wade Oval! Free skating thanks to @CleveFoundation #TCF100 pic.twitter.com/FeWrdIZS9A

Still time to get in on the action of free things to do today thatnks to @CleveFoundation http://t.co/h98VNgysJn @FreshWaterCLE

Talked to @216Naturalist at @CleveMetroparks' #toboggan chalet for @CleveFoundation #TCF100 Family Day. The park does Winteriffic each year.

Still plenty of evening activities to enjoy during our "Day of Family Fun." http://t.co/wQZufFiZ4a #TCF100

Did you celebrate @CleveFoundation #TCF100 today? Tweet us your photos!

We found winter! Skaters enjoying @inthecircle during our "Day of Family Fun." Rink open for FREE 'til 7! #TCF100 pic.twitter.com/mwmqwdbRMf

If U need to warm up after @InTheCircle's Rink at Wade Oval, I recommend the @cbgarden's #rainforest. #TCF100 https://t.co/qOl78G9yNC

Gr8 to see so many #Cleveland area ppl at the @InTheCircle's Wade Oval Rink for @CleveFoundation #TCF100 Family Day. pic.twitter.com/Yp2HeSzROj

We’re having a blast at Cleveland Metroparks toboggan chutes today! A big THANK YOU to The Cleveland Foundation... http://t.co/PZvFGkanpn

.@clevemetroparks Congrats on hitting the 2,000 visitors at today's @CleveFoundation event. We had a great time. pic.twitter.com/UZrVr6F5Bz

Night time tobogganing with clevemetroparks at the end of our last community gift in our exciting… http://t.co/9ProiJNsnj

This last day of 2014 I want to recommend that U view @CleveFoundation's Enduring Trust video: http://t.co/GKmW2lwwrd pic.twitter.com/TKmvlQoxTO

Happy New Year, #CLE! This word cloud is based on YOUR comments from our centennial year. We are grateful! #TCF100 http://t.co/gHOKY0ROMI

Just when you thought the party was over, many of our monthly gift partners are back w/ 2015 opportunities in #CLE: http://t.co/dPWUbKwr6g 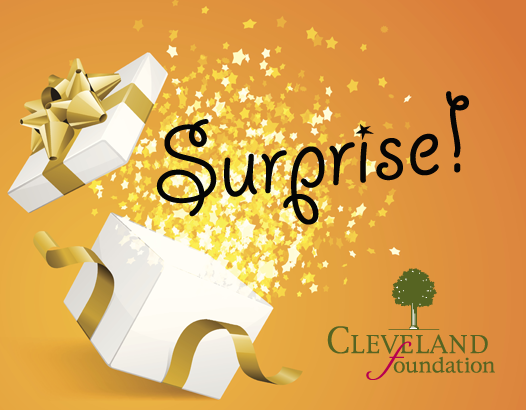 Surprise! This blog post was mostly finished on New Year's Eve, but we are glad we didn't publish it then, since on January 2, 2015, the Cleveland Foundation made a surprise announcement!

RELEASE DATE: 01.02.15
CLEVELAND – As the Cleveland Foundation officially begins its 101st year today, it is pleased to announce that many of the organizations it partnered with last year for the monthly centennial gifts have chosen to continue the celebration into the new year by offering more gifts throughout 2015, in honor of the foundation’s year of giving and the start of its second century of impact in the community.

Watch for more updates on the Cleveland Foundation's news web page (ClevelandFoundation.org/News/) and from the 16 participating organizations. Here is the list, and links for more details:

The #CLEcarousel has hit its 100th ride of 2015! Thanks to the @CleveFoundation, the riders can come back for free! pic.twitter.com/NuqV6xugng

It looks like 2015 will see a continuation of the great activities of the centennial year of the world's first community foundation. Thank you, Cleveland Foundation!