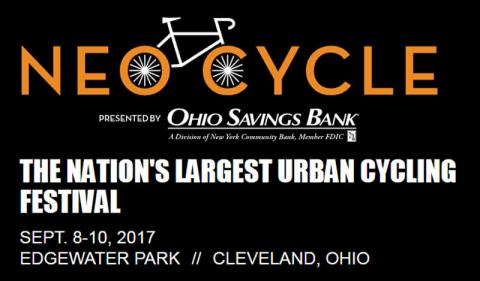 On September 8-10, 2017, the largest annual cycling festival in the United States, NEOCycle (@NEOCycleCLE - #NEOCycle), was held in Cleveland at the Cleveland Metroparks (@CleveMetroparks) Edgewater Park, through the support of the Greater Cleveland Sports Commission (@CLESports)! This was my third year attending what has become a great Cleveland tradition!

Here is some additional information taken from part of the August 31, 2017, press release from the NEOCycle Press Kit:

NEOCycle’s The Hub at Edgewater Park driven by Subaru will be the epicenter for the nation’s largest urban cycling festival’s fourth annual event. During the weekend of Sept. 8 - 10, 2017, NEOCycle, presented by Ohio Savings Bank, a division of NYCB, will host a projected 12,000 attendees partaking in multiple outdoor lifestyle entertainment opportunities .

In addition to hosting four of NEOCycle’s six races & rides, attendees can rock out to live talent at Music Fest powered by IGS on Sept. 9 - 10 at The Hub at Edgewater Park. The festival recently announced Strand of Oaks as it’s official headliner . This Philadelphia - based band will be joined by local acts Carlos Jones and the Plus Band, Saintsenca, The Dorian Walker Experience and The Whiskey Hollow along with five other Ohio - based bands. The Music Fest band schedule is available here.

Read the full NEOCycle press release with even more details: 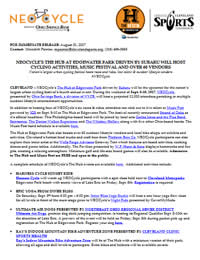 Due to other activities occurring this weekend (there is always so much happening in Cleveland!), I did not get to talk to as many people at the booths as I would have liked. I recommend reading my September 29, 2015, blog post Weekend Fun: NEOCycle & Cleveland Pops where I go into more detail about the organizations that are regularly represented at the event.

My goal for this blog post is to share my 83 @sos_jr tweets and retweets, which have photos and videos from the event, as my way of thanking the Cleveland Metroparks, the Greater Cleveland Sports Commission, and the NEOCycle organizers for this fourth annual event!

You really have to experience this event firsthand, but I hope this will give you a taste of it so that you will want to go yourself next year!

.@KarenGahlMills I enjoyed @NEOCycleCLE the last 2 years at Edgewater Park!

I was so impressed, I wrote blog post https://t.co/HPpzWQ4HTH pic.twitter.com/vCxWViiw8W

Thank you for this piece, Stuart! Let's make it three years in a row of #NEOCycle! We can't wait to see you again next weekend https://t.co/zIl4aK2sOy

NEOCycle started on Friday, September 8, 2017, but I missed the first evening's activities, since I was attending the Art Book & Zine Fair at MOCA Cleveland, and the Cleveland Museum of Art's MIX celebrating the new ArtLens Gallery. On Saturday, September 9, 2017, I attended the NEOCycle afternoon activities, before needing to leave early for an evening party.

That’s gonna be a yes from me, dog. It’s @ultimateairdogs time! See these skilled pups fly through the air in tonight special sneak preview! pic.twitter.com/CMFAovY52M

"Home is where the wifi connects automatically." Attendees can connect to the FREE #NEOCycle network, thanks to our partner @netxinternet! pic.twitter.com/DGx8i8S06m

.@themedialuna I hope U enjoy your time in #Cleveland!

Onsite registration and check in for preregistered riders is OPEN! 62 mile leaves at 8am, 31 at 9am, and the 10 at 10am. Come down & ride! pic.twitter.com/FPLZ9S0vg7

.@NEOCycleCLE sure got a beautiful day for day 2 of #NeoCycle at Edgewater Park on the edge of #LakeErie https://t.co/wo40aruQ6X pic.twitter.com/zdLTZaz9iD

All the way up @ThrillerBmx high-flying team is out here putting on their first show of the day at The Hub! pic.twitter.com/IrSi7jQ6az

I arrive Saturday afternoon, September 9, 2017, at Edgewater Park and the NEOCycle event!

We did the math. In a few short hours, we picked up 378.45 lbs of trash! #WaterIsLife pic.twitter.com/7kjjnMxXCT

Thanks to all 149 volunteers who showed up today! #WaterIsLife #ThisIsCLE pic.twitter.com/1WYJdQrfGt

.@ErinDeeHuber getting volunteers back together, trash getting weighed. Learn more about our efforts at https://t.co/m4DbsKPwqN pic.twitter.com/oiQifVxg8h

Thanks to the folks from @moen for awarding prizes! One was for most trash collected by a team - 51 pounds!!! #WaterIsLife pic.twitter.com/i2TlXjc1mk

Meet person from NY at @NEOCycleCLE who had me try Oculus Virtual Reality Headset.

Since she is from out-of-state, I recommend she goes to @Clevelandart to see the #ARTLENSgallery https://t.co/twRbh4sYgk

Would love to host your new friend for #VR #AR demos at our new office @AgoraCLE! Tell her to say hello@cleVRcommunity.com pic.twitter.com/LgxOrcv7Az

Take time to downshift after your ride & enjoy this year’s Music Fest, powered by @IGS. They'll give you the energy to jam into the night. pic.twitter.com/M7iSBCjfmA

Looking for your ultimate guide to #NEOCycle? Check out our app! Download the Destination Cleveland App for all the info you'll need pic.twitter.com/9kSmQLBW4E

Very cool that the #EastsideGreenway that I wrote about in 2015 is expanded to become the #CuyahogaGreenways! https://t.co/hjBTaE7pld

Congrats to @MajorLeagueTri #NEOCycle winners Cleveland Rock and Roll and the rest of the triathlon athletes on today's performance! pic.twitter.com/BpaChp9hV9

2 ppl I talked to at @NEOCycleCLE were interested in the Appalachian Trail.

Unfortunately I had to leave @NEOCycleCLE early to attend a party tonight but I recommended everyone go to @CleveMetroparks Edgewater to see https://t.co/79Ck0uiTyM

Thanks! This is the third @NEOCycleCLE that I have enjoyed! https://t.co/szRfBqjaC2

If you're heading downtown tonight, remember the Shoreway will closed for @NEOCycleCLE's #NEOCycle night ride https://t.co/9hTaMvP6Gh

Thank you for coming!! #RideOn https://t.co/ZYaSZm5gT6

Thank you to @InnerBlissYoga1 for energizing our riders with their Epic Yoga Flow class before Night Ride! pic.twitter.com/3GvFytoFGS

On Sunday, I attended the NEOCycle afternoon activities for a second day.

Grab some motivational posters at the registration tent to cheer on your riders!!!

Because "Hey random stranger, we're proud of you!" pic.twitter.com/bVZv9kMcHD

People who say 'all you need is love' obviously have never gone without wifi. Connect to the open #NEOCycle network thanks to @netxinternet! pic.twitter.com/KcAzJgyhEG

I arrive on Sunday afternoon, September 10, 2017, at Edgewater Park to see an incredible sight!

Arrive at @CleveMetroparks' #Edgewater #Park for @NEOCycleCLE just at the right time to see a great sight! pic.twitter.com/ZaWB03RUFt

Arrive at @CleveMetroparks' #Edgewater #Park for @NEOCycleCLE just at the right time to see a great sight! pic.twitter.com/PdXXfCkJEl

Right next to bike path in upper area as people take photos of it. pic.twitter.com/WJX5KSBGqF

Our @NEOCycleCLE #cyclocross riders coming up the hill at Edgewater Park like ! Absolutely in love this event! #neocycle pic.twitter.com/lLK4ODlmz3

If U R not here, U R missing out! pic.twitter.com/1WlSHNm5Mg

It's a beautiful day in CLE!
I would love it if you'd spend a couple hours with us celebrating life with music,... https://t.co/PklUgwUulN

#Cleveland "Thanks For Hanging Out At #NEOcycle!"

As amazing as the NEOCycle Weekend was, what I find most interesting are the activities happening at Cleveland Metroparks Edgewater Park every weekend over the summer. See these tweets and then go visit the park in the summer to see for yourself!

Great way to end the day in this #Cleveland #park. #ThisIsCLE pic.twitter.com/KDKyRHKVtr

Here are some additional tweets about the NEOCycle Weekend.

So inspired by all the riders of #NEOCycle this weekend! Hope we've hydrated you well! pic.twitter.com/JbHFpbQboX

.@KatieInTheCLE Good talking to you at @NEOCycleCLE today about your design group. I look forward to learning more.

Katie, here is the @CDPUG info I told U about.

I guess the next big thing will be @Ingenuityfest.https://t.co/DLbov31sRs pic.twitter.com/fxYqwCWTip

Thanks again for sharing about us!

I enjoyed attending my third NEOCycle weekend, and want to again thank the organizers and supporters for making it happen. I look forward to attending again in future years.