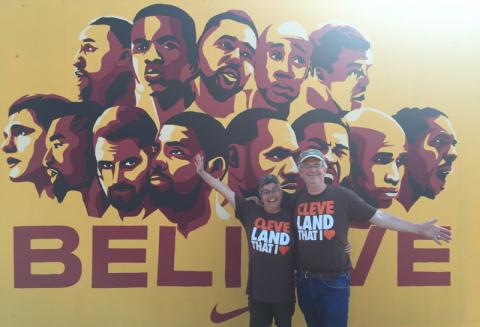 We did not think that we would be attending the Cleveland Cavaliers (@Cavs) NBA Championship Parade on Wednesday, June 22, 2016, but at the last minute Stuart was told that he would have the day off. It seems many other employers also recognized that this was a once-in-a-lifetime event for people in the Greater Cleveland area, and let their employees attend. The number of people attending the parade was close to the total number of people who live in Cuyahoga County!

The day was significant for the Cavs and their fans, and for the city as a whole, since this is the first major sports title in 52 years for Cleveland. Beyond that, we want to express how impressive it was to be at such a large event with so many friendly and courteous people. Not only did we experience this, but we have since spoken to others who felt the same way. By our nature, we tend to always expect the best from people, but this event surpassed even our best expectations.

On Cleveland.com (@ClevelandDotCom), read about "what Cleveland is made of" in this article: Cleveland police chief praises behavior of community, officers during Cavs championship celebrations by Jane Morice (@janemorice)

We hope you enjoy our photos and tweets of the day.

Despite the large crowds, we were able to see a lot of the parade and the activities occurring downtown. Here are some of our photos, plus we recommend you see all the photos/videos shared in the tweets below:

The best way to learn about the day is to see the following tweets from people who attended the event. Also note that some tweets link to articles with more information. Since there are 249 tweets/retweets that we shared from this event, they are broken down into two sections.

Tweets & Retweets Before the Cavs Parade

We had a great time even before arriving in downtown Cleveland for the Cavs parade. As we were in line for the Greater Cleveland Regional Transit Authority (RTA) (@GCRTA) rapid transit, Stuart watched the tweets of what was happening downtown and read some of them to the people in line. It is through Twitter that we learned that the parade was delayed due to the large crowd.

Due to the very long lines at the RTA rapid transit station, RTA ended up also bringing buses to the station which we rode downtown. We had to stand up for the ride, but were happy when we arrived close to the parade route just before it began.

Tweets & Retweets from Cavs Parade/Rally and After

We stood at a prime location at Lakeside and East 9th street. People were lined up along the parade route at least 50 deep.

Throughout the day, we heard that there were over 1.3 million people attending the Cavs victory parade! We don't know if this is true, and have not been able to find an official count.

Be sure to read the Cleveland.com (@ClevelandDotCom) article Crowd estimated near 1 million for Cleveland Cavs championship parade by Rich Exner (@RichExner), which has interesting information about the day.

Since, in 2014, we wrote a blog post about being invited to attend a Cleveland Cavaliers game from the owner's suite and floor box, we want to take this oportunity to again thank the Cavs organization and Bizdom Cleveland (@BizdomCleveland) for the great time. Here is the link to the blog post:

We are looking forward to more victories for the Cavs and for the Greater Cleveland community. We hope that next year we will be writing about a Cleveland Cavaliers NBA Championship Parade again!

Great pictures and a wonderful day for Cleveland.

Dave,
Thank you for your positive comment. I'm glad you like our pictures.
Yes, it was a great day for Cleveland!
Stuart

In reply to parade by Dave Cunix (not verified)