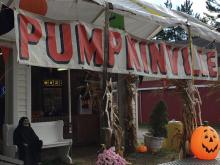 The Smith family has a tradition of going to Pumpkinville each fall. This year, on Sunday, October 25, 2015, Julie and Stuart also went to Holden Arboretum (@HoldenArboretum) after visiting Pumpkinville. We decided to write a blog post, since this year, there were some special situations to note. 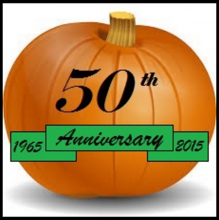 Since it was Pumpkinville's 50th anniversary year, we wanted to include a few of our photos to congratulate them. 50 years in business is worth noting! Pumpkinville is located in Kirtland, Ohio.

We also had two reasons to make special note about our fall visit to Holden Arboretum.

First, while we have attended Holden Arboretum in the past, as guests of family or friends who were members, we are now able go through their reciprocal membership program with the Cleveland Botanical Garden (@CBGarden). If you are a member of either of these organizations, you owe it to yourself to take advantage of this great, new benefit.

Secondly, we were excited about experiencing the new Holden Arboretum Murch Canopy Walk and Kalberer Emergent Tower. They had just opened on September 6, 2015. They were incredible! 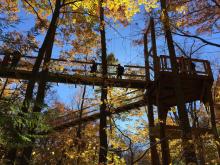 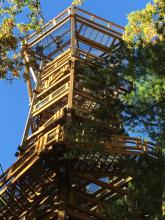 Here is what Holden Arboretum's website says about these new additions:

It was a spectacular fall at The Holden Arboretum with more than 40,000 visitors passing through the gates in September and October. Many of them came to experience the new Judith and Maynard H. Murch IV Canopy Walk and the Kalberer Family Emergent Tower, which opened on Sept. 6. To all of our guests who made the opening of these new structures a success, thank you! The structures are now closed for the winter and will reopen on April 1. We will be using the following months to look for ways to improve the visitor experience.

We learned from a Case Western Reserve University (@CWRU) graduate school friend of Stuart's, who works in the membership office at Cleveland Botanical Garden, that the tower has been a big success. It has greatly increased the number of people on the Holden Arboretum grounds. (The non-member tickets were selling out before noon.)

We hope you enjoy our photos and videos, and that they encourage you to go and see for yourself!

Here are our @sos_jr tweets and retweets sharing our experience at Pumpkinville and Holden Arboretum on October 25, 2015. Please share any photos and videos that you find interesting by retweeting.

I did a Twitter search for #Pumpkinville and found my photos from last year. https://t.co/squ8ftrqo4 pic.twitter.com/T7qPPNS8nC

I've been to @HoldenArboretum in the past, but now can use my @CBGarden membership. Beautiful day celebrating trees. pic.twitter.com/0iuAi7TKUh

As a nature lover, I feel like I jilted myself of only just now learning about @holdenarboretum canopy walk.

@history_dreamer It will be open this fall until Nov. 1 and reopen April 1 next year. Come and see us.

If you visit Pumpkinville and Holden Arboretum, and share your photos and videos on Twitter, please feel free to let us know. We would love to see them and share them with others by retweeting.