I had a blast!

I use the word "experimentation," because this year the focus was on hardware products and the science behind them. The active involvement of NASA Glenn Research Center (@NASAglenn) with this year's LaunchHouse Accelerator supported this new level of experimentation.

I also use the word "experience," since attendees could get up close and personal with many of the products by actually trying them out.

Here is the official announcement for the event:

While startups deliver their first public pitches to the investment community, the expo is a hands-on experience that showcases these elite companies and their products. We invite you to touch, test and experience the cutting-edge technologies that have been developed over the past 16 weeks.

I had a blast, questioning these Cleveland startup leaders about their products and the technology behind them. It was a great time!

Here is the official LaunchHouse Accelerator Expo (LHXPO) booklet, which was given to all attendees. 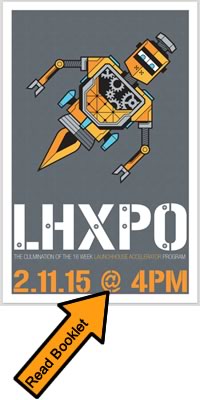 Here are my observations from my conversations with companies' representatives.

Alternative Defense Strategies' (@SafeZoneCM) product, Safe Zone CM™, is a nonlethal pepper "gel" that can be safely used against an intruder. Primarily a product developed for schools and other public facilities, Safe Zone CM™ comes in a locked box that only administrators of the building can open with a secure combination lock. Alternative Defense Strategies is also exploring a future product that would provide a wireless system that would open the box automatically in case of an emergency. At their expo booth, they demonstrated how to target and spray an inert version the gel. Most of the components of the Safe Zone CM™ product are made in America (I think only the lock is foreign-made). In my opinion, the most important part of Safe Zone CM™ is not the hardware, but the special training provided on how to use the product in an emergency setting.

I really enjoyed talking to the representatives from Beegit (@ProjectBeegit), since I could directly relate to the content management software they created. Some of the features they demonstrated for me included using Git for version control, and the ability to output content to many different formats (see related photo in tweet below).

Plasma Pure Water is a system being developed right here in Cleveland by NASA Glenn Research Center (@NASAglenn). This system rids water not only of bacteria and germs, but also of chemical pollutants. The booth was so crowded with interested people that I was only able to talk to a NASA Glenn staff person not directly affiliated with Plasma Pure Water. I also learned about some of the other exciting things happening at NASA through their partnerships with private sector businesses. See more in my NASA section below.

I first heard about Phazon's (@PhazonAudio) wireless earbuds at a Cleveland TechPint event (see my TechPint blog posts to learn more). Targeted to professional and amateur athletes, these earbuds free the user from the wire tangle while they work out. The true stereo wireless system will work with a smartphone or other portable audio device and will use Bluetooth to independently control each earbud.

I did not visit their booth, so please see the description in the LHXPO booklet that was sent to me by LaunchHouse.

UpMo is a newly formed company that combines the strength of the technology from two former companies to create a new product. The UpMo smartphone app makes it easy to search and apply for a career position. Different versions of the UpMo app will target different career sectors. Current plans are to have the first version focus on placement services for attorneys.

After seeing WJI systems' public pitch, I had hoped to learn more details by talking to their staff at their expo booth. Unfortunately, as I worked my way around the expo, I came to the WJI systems booth near the end of the evening, and only had time to talk to them briefly. They have a very cool product to monitor house "vital signs" for property managers of vacant houses. Vacant houses are at risk of water moisture damage, vandalism, and other neglect. Putting a few WJI systems units in the house could potentially save the owners a big expense. I recently heard of a vacant house that had a pipe freeze and flood a basement -- a big mess that would have done less damage if WJI systems had been in place.

One day until #LHXPO! Meet the #startups that went through Ohio's 1st #hardware accelerator. Details: http://t.co/v648i9uXud

Congrats to @LaunchHouse on being Ohio's 1st hardware accelerator and good luck to all at #LHXPO today!

@LaunchHouse We'll be there to check it out, looking forward to it! #LHXPO

Made my way over @LaunchHouse for #LHXPO ... Very interesting so far

We're happy to be presenting tonight at #LHXPO

.@CreditFlex Next time at @LaunchHouse event or other venue let's make a point to connect.

.@jrgifford Good seeing at @LaunchHouse tonight. Sorry we did not get a chance to talk. I hope all is well with you and your family.

#Startup trends in 2014: Why hardware is future http://t.co/sgbXdJUQK4 Interesting to read after being at @LaunchHouse's #LHXPO last night!

Not able to attend last night's #LHXPO? Check out this recap & learn what's next for these #startups http://t.co/5kh81Z8U8a via .@rlsmith

.@NannetteSC Thx for the retweet about @NASAglenn. Plus thx for letting me know about: @NASAGlennBiz & @NASAsolutions. I want to learn more.

Thx @NASAGlennBiz for retweet. I hope at a future @NASASocial event at @NASAglenn to learn more about your program: https://t.co/LfcRa1smbk

It would be remiss of me if I did not share with you how cool it was to see NASA Glenn Research Center (@NASAglenn) as part of the this event. While at the LaunchHouse Accelerator Expo (LHXPO), I briefly talked to the representatives at the NASA Glenn booth, in addition to the NASA Glenn staff at the Plasma Pure Water booth.

I remember being fascinated, as a high school student, by the NASA Spinoff paper magazine. NASA Spinoff was a publication that presented products that were available for the general public and private industry as a direct result of the research done by the National Aeronautics and Space Administration (NASA - @NASA). At LHXPO, I learned from the NASA Glenn Research Center staff that Spinoff.NASA.gov website (@NASAspinoff) continues this tradition.

Read more on the NASA Spinoff history online, from which the following paragraphs are taken:

NASA’s Spinoff publication accomplishes several goals. First, it is a convincing justification for the continued expenditure of NASA funds. It serves as a tool to educate the media and the general public by informing them about the benefits and dispelling the myth of wasted taxpayer dollars. It reinforces interest in space exploration. It demonstrates the possibility to apply aerospace technology in different environments. It highlights the ingenuity of American inventors, entrepreneurs, and application engineers, and the willingness of a government agency to assist them. And finally, it continues to ensure global competitiveness and technological leadership by the United States.

Another reason I was glad to see NASA at LHXPO was that I was sorry that I missed the February 2, 2015, NASA Social (@NASASocial), which took place at NASA Glenn Research Center. After talking to the NASA Glenn staff at LHXPO about the tentative location for the next NASA Social, I am really excited about attending the next NASA Social. (I was fortunate to attend an event in 2012. See my Cleveland NASA Tweetup blog post.)

As a result of a tweet I received after the LHXPO event, I learned about @NASAGlennBiz and @NASAsolutions. I look forward to learning about these Innovation Projects Office at NASA’s Glenn Research Center and NASA Technology Transfer programs.

What Others Are Saying

Here are some other articles that relate to this event, plus my blog post about the previous LaunchHouse event:

I have seen the following quote, which I really love, at other LaunchHouse events.

Some People Dream Of Epic Things, While Others Stay Awake And Do Them.

I thought that it was especially appropriate to see that quote as I was leaving LHXPO. I had spent the evening talking to people who were bringing new ideas to life. It was very energizing to be an observer of their success.

I congratulated Todd Goldstein, Co-Founder of LaunchHouse, on the success of the LHXPO evening, and he offered his assistance with this blog post.

Thank you to Todd Goldstein, and to LaunchHouse's Director of PR/Marketing & Partner, Stephanie Bartolone, and Director of Entrepreneurial Programming, Katie Connelly, for sending me the official LaunchHouse Accelerator Expo (LHXPO) booklet, and for confirming that I had the correct website and Twitter names for all the companies.

I look forward to learning about the further progress of the LHXPO 2015 companies.