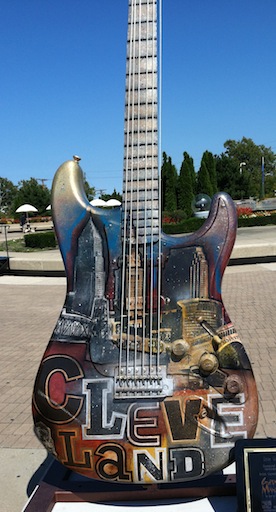 The United Way of Greater Cleveland Guitarmania Gala Auction will take place on Saturday, October 20, 2012 (ticket information here). After that, you will never see the 2012 guitars together in one place again!

Besides the guitars just fun to see, this year members of the Cleveland Twitterverse have an extra reason to see one guitar in particular. "Our" #GuitarMania #CleTweetUp guitar was created by Cleveland artist Garrett Weider (@GarrettWeider), and we added our names at an extra special #CleTweetUp at the Cleveland House of Blues (@HOBCleveland) on  March 21, 2012. Thanks to event sponsors Cleveland.com (@ClevelandDotCom) and the United Way of Greater Cleveland (@UnitedWayCLE)

Learn all the details here:

Here are my tweets about my visit to Guitarmania at the Rock Hall on Sunday, September 16, 2012:

.@garrettweider I took more pic/vid of #GuitarMania at @rock_hall 2day (including your guitar design). I wil let you know when add to blog.

Unfortunately, I was not able to attend the United Way of Greater Cleveland Guitarmania Gala Auction at Rock and Roll Hall of Fame and Museum (@Rock_Hall), but via Twitter I was able to see photos of the event and learn the final status of "Our" #CleMeetup #Guitarmania Guitar.

First, the status of the guitar made by Cleveland artist Garrett Weider (@GarrettWeider):

Here are some photos shared via Twitter of the event: