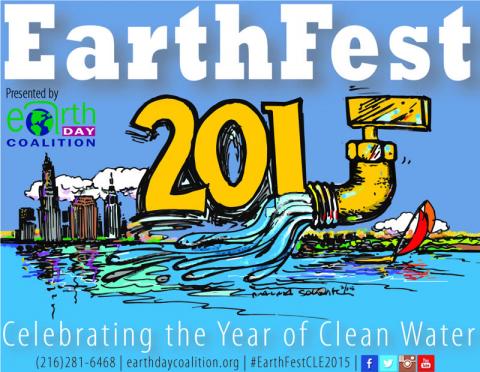 We used to attend the Earth Day Coalition (@EarthDayCoalit NOTE: later in 2015 Twitter name changed to: @EarthDay_CLE) EarthFest event every year, but have missed the last several years. We have fond memories of walking from downtown Cleveland to the first EarthFest at the Cleveland Metroparks Zoo (@ClemetZoo) when our oldest son was a baby riding in a child carrier on Stuart's back. Every year we attended, we were always interested in learning about the important work of the participating agencies.

Here is information from the Earth Day Coalition history web page about how it was founded to commemorate the twentieth anniversary of Earth Day:

Earth Day Coalition was incorporated in 1990 to commemorate the twentieth anniversary of Earth Day in Ohio. Our first office was located in the Turning Point offices on the West Superior Viaduct on the west bank of the Flats in downtown Cleveland. With a small budget, two staff persons and hundreds of dedicated volunteers, EarthFest ’90 was presented in the newly constructed RainForest building at Cleveland Metroparks Zoo. Over 38,000 people attended our first Earth Day event along with exhibitors from northeast Ohio environmental organizations, agencies, schools and businesses, and generous event sponsors. Each year since 1990 hundreds of exhibitors and between 10,000 and 50,000 people celebrate at EarthFest, making this event one of the longest standing and most successful Earth Day celebrations in the country.

With such a great history, and a personal connection to our family, we were excited to be attending EarthFest 2015.

When we got to EarthFest 2015 on Sunday, April 19th, things were hopping!

We arrived in the afternoon, and thus missed the opening ceremony. After seeing the large number of displays, we wished we had come sooner. Even though the EarthFest was now being held at the Cuyahoga County Fairgrounds (@CuyFair), we did not know that it would be so big. We did not think that so many of the fairground buildings would be used. We were pleased to see so many people attending -- it was quite a crowd! -- and so many participating environmental organizations.

Here are our photos and full videos from Earth Day Coalition's EarthFest 2015:

If your device does not support Flickr.com photos/videos, please view them here.

The following are some shorter versions of the same videos are on our Flickr.com account that are also embeded in the tweets below.

According to the press release we read after the event, there were over 270 exhibits in ten sustainability exhibit areas. We also learned that Earth Day Coalition's EarthFest is "Ohio’s largest environmental education event and the longest running Earth Day celebration in the nation."

Here is some official information about the event: 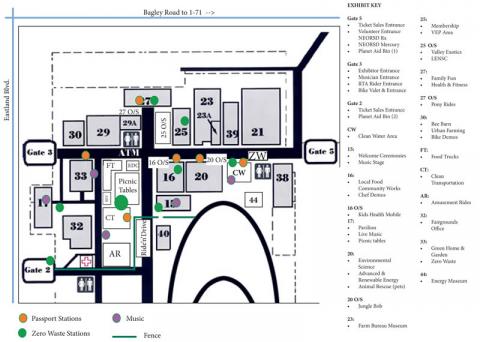 We had a late lunch while attending EarthFest 2015, and learned firsthand that it was a "Zero Waste" event:

EarthFest is a Zero Waste event. Zero waste requires thinking about how items can be eliminated from the waste stream and how the remaining waste can be converted into a resource. At EarthFest we will provide bins for composting, recycling, and waste with the ultimate goal of having little to no waste at the end of the event. EarthFest 2014 generated only 7 bags of trash because of the cooperation and assistance of last year’s exhibitors, attendees, and volunteers. With the help of the Cuyahoga County Fairgrounds, Kimble, Zero Waste NEO, and plenty of dedicated volunteers, we hope to make our goal of 90% waste diversion. All vendors and exhibitors have also committed to our zero waste guidelines by only using compostable and recyclable materials.

People attending the event seemed genuinely excited to participate by actively placing their compostables and recyclables in the appropriate bins.

It is great that the Earth Day Coalition provides an example of how to run a zero waste event. We would like to see more organizations consider the environmental impact of their events by incorporating good environmental stewardship at their public functions.

We hope that more organizations follow the lead of the Cleveland One World Festival (@CLEOneWorldFest) and the Earth Day Coalition (@EarthDayCoalit). Learn more with these resources:

We hope that people who are reading this blog post will share these resources with other groups planning events.

Only a few more days until the #EarthDay Coalition's #EarthFest2015! Will you be there on Sunday? pic.twitter.com/BpIzhyY9gY

It's a perfect day to ride the biodiesel ferris wheel #EarthFestCLE2015 pic.twitter.com/2e3LxrLzW7

Shuttlebike is safe for all ages,if you can cycle and swim you good to go! If you can't swim stay on your bike. pic.twitter.com/zhjwQRVvIB

A great day at #EarthFestCLE2015 we hope you had a chance to stop by and see #CLE Water and enjoy the day #tapintoit pic.twitter.com/Vx64tzkLvG

Tremendous day at #EarthFestCLE2015 today. Thanks to all who stopped by and made it great. #LoveCleanWater pic.twitter.com/DgsxQhOe7n

.@EatDrinkCLE Yes, great time at @EarthDayCoalit event. I hope to see you at next event we both attend. Take care.

Here are some additional tweets and a retweet from the Earth Day Coalition (@EarthDayCoalit) with EarthFest 2015 photos:

The welcoming ceremonies have begun! Scott Sanders starts us off! #EarthFestCLE2015 pic.twitter.com/3ew9yG9tpS

Thank you to Mayor Frank Jackson for your encouraging words! #EarthFestCLE2015 #CLE pic.twitter.com/PcfFtmCB4i

Thank you to Julius Ciaccia and the @neorsd for all their support of #EarthFestCLE2015 pic.twitter.com/XwP4kck8OG

Thank you @WEWS for your support! Be sure to watch their coverage later today. #EarthFestCLE2015 pic.twitter.com/i990rHLyyx

The Wikipedia entry for Earth Day reports that:

Earth Day is an annual event, celebrated on April 22, on which day events worldwide are held to demonstrate support for environmental protection. It was first celebrated in 1970, and is now coordinated globally by the Earth Day Network,[1] and celebrated in more than 192 countries each year.[2]

To honor Earth Day, that in 2015 was a Wednesday, we want to share with you our @sos_jr tweets and retweets from the actual day of Earth Day, and related tweets following the day. Please retweet those items that you think your followers would find useful.

It's #EarthDay2015 Have you hugged your planet lately? pic.twitter.com/ewZn9Y6Bpt

Happy #EarthDay We could all use a history lesson #wisdom http://t.co/O3O6F2d7kS

Here's our post from last year on how iimportant it is to restore Great Lakes wetlands. http://t.co/h4NXDbKuez

Honored to be speaking at Fairlawn Rotary this morning! Thanks for your support in bringing safe water to rural Uganda w us! #Rotary

Happy #EarthDay from the ATC! We hope you're celebrating with some #TrailTime! #AppalachianTrail http://t.co/Lg4SCHuagW

It's not easy being green, but we can try! https://t.co/qMPNgawVdW

Celebrate Earth Day! Did u know that u can recycle ur old cell phone, smart phone, or tablet by donating it to DVCAC? http://t.co/Qnn8bbQcyE

Did you know that flushing medications down the toilet pollutes the water and can't be treated by @neorsd? Don't do it!

Check out @CLEhistorical today for some great reflections on Cleveland's environmental past. #EarthDay2015

Happy #EarthDay! Use Instagram to show us your favorite people, places and things in #CLE! Use… https://t.co/DECKgVpJlN

With recent improvements, only 4.5 billion gallons of raw sewage is dumped into the Cuyahoga River each year. http://t.co/GYT7SzyYKa

.@DrinkLocalTap Happy #EarthDay to U too! Gr8 to know of your work from #Cleveland to Uganda http://t.co/3Yt2dEqZ1y https://t.co/WTVjd9e9Ba

This seems like a perfect post for Earth Day - a tip to help reduce food waste. And use filtered tap H2O not... http://t.co/8b4JehEXJN

Where in the World is Walworth Run? http://t.co/eMsIDzImrR (Image: City of Cleveland Archives) #EarthDay2015 #CLE pic.twitter.com/eGPLd0oWMd

A piece of street art that makes you think. #EarthDay pic.twitter.com/p2mXffg9LZ

#EarthDay can be every day. Like 5/6 when we have @garylangham of @audubonsociety speak on birds & #climatechange | http://t.co/mExf93Myla

As mentioned in the Earth Day tweets above, we have some related blog posts that talk about the good work that local organizations are doing to improve our environment. We want to invite you to learn more by reading these: